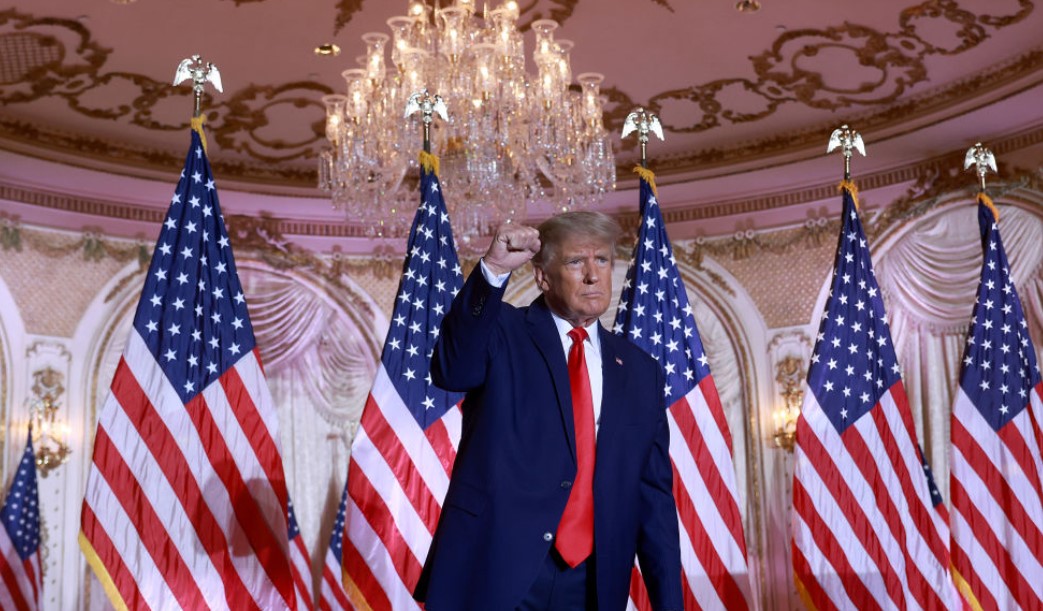 After weeks of anticipation and following multiple political pundits’ predictions, it was made official on Tuesday evening.

Last night, former President Donald Trump announced from Mar A Lago, in Palm Beach, Florida, that he is running for a second term in 2024 saying;  ‘America’s Comeback Starts Right Now’.

🚨TRUMP: "In order to make America great and glorious again, I am tonight announcing my candidacy for PRESIDENT OF THE UNITED STATES." pic.twitter.com/xGTxFHE3Yr

“In order to make America great and glorious again, I am tonight announcing my candidacy for the president of the United States,” Trump said.

The former president mentioned the midterm elections that fell short of a predicted “red wave” in Congress but celebrated the news that Republicans had taken back the House.

“Nancy Pelosi has been fired. Isn’t that nice?” He said.

He urged his supporters to get out and support Republican Senate candidate Hershel Walker in his runoff election in Georgia.

Former President Donald Trump began his 2024 presidential campaign just as he ended his presidency in 2021: with a whole lot of inaccuracy.”

“Like many of Trump’s speeches as president, his announcement speech at his Mar-a-Lago resort on Tuesday was filled with false and misleading claims about a variety of topics – from his record in office to his Democratic opponents to the economy, the environment and foreign policy.”

In what could have been accomplished in less than 15 minutes, the 45th President of The United States spoke for a little over an hour to hundreds of invited guests and a few media outlets.

Trump’s demeanor was more subdued than most of his public appearances, as he reflected on what his administration had accomplished in his first term.

He lamented that he left office just as the United States was about to experience a “Golden Age”.

“Inflation was non-existent, our southern border was by far the strongest ever,” he said.

TRUMP: "This will not be my campaign. This will be our campaign all together. Because the only force strong enough to defeat the massive corruption we are up against is you, the American people." pic.twitter.com/ZaOC3PFtoA

Trump intentionally avoided a deep dive into the election fraud many believe took place in the 2020 election. He did however imply that some of those against his policies might have had something to do with the results.

For example, while discussing the large economic tariffs he placed on China, Trump implied that they angered the Communist leadership in Beijing and possibly led them to try to meddle in the election.

“Many people think that because of this China played a very active role in the 2020 election. Just saying. Just saying,” he said.

Trump also pointed out the success of international relationships with the leaders of hostile nations.

“China, Russia, Iran, and North Korea were in check. They respected the United States and they respected me. I knew them well,” he said.

He criticized Biden’s leadership, arguing he was “leading us to the brink of nuclear war — a concept unimaginable just two short years ago.”

Trump described the country under the leadership of Biden as a “nation in decline” and a “failing nation” where Americans were experiencing “pain, hardship, anxiety, and despair.”

“Our country is being destroyed before your very eyes,” he said,

Under Biden, he said, the border had been invaded by migrants, illegal immigrants, smugglers, and criminals.

The popular leader in the MAGA movement did not refer to any potential primary rivals during his announcement but did imply that his campaign would once again be targeted by the Washington establishment.

‘The Washington establishment wants to silence us, but we will not let them do that,” he said.

Here is the entire event: