MAGA TIME! President Trump’s Approval Back Up To 52% – Black Voter Approval Jumps to 45% in Race Against Joe Biden

Of all the accomplishments President Trump will be remembered for, the greatest, I believe, will be the fact that in spite of endless attacks from the left worldwide, and the internal backstabbing from RINOs, he has managed to stay on task and will probably be re-elected in 60 days.

This in spite of the continued media exaggerations over COVID-19 and constant attacks on the president by the liberal mainstream media.

The Media Research Center (MRC), which keeps track of these sorts of things,  says in their study on August 17th, that viewers heard 150 TIMES more negative comments about Trump than Biden. 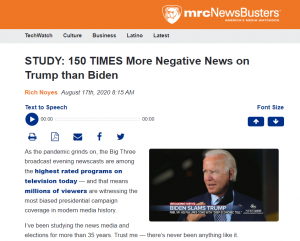 “I’ve been studying the news media and elections for more than 35 years. Trust me — there’s never been anything like it,” said Rich Noyes, research director for the conservative press watchdog.

The study also shows that the main networks, ABC, CBS, and NBC, aired nine times as much coverage of Trump than Joe Biden, with 95% being negative.

The most accurate polling company from the 2016 election cycle, Rasmussen, just released some great numbers from the Trump team.

Barack Obama had a 47% approval rating at the same point in his presidency.

What is more significant– President Trump has 45% approval from black voters.

This is a HUGE when you compare it to only 8% he received in 2016. If Trump gets anything over 20% of the black vote, especially in swing states likes Florida, PA, WI, MI, and Ohio, the democrats, even with some voter fraud, will have no chance of taking back the white house.

On a side note, if the same percentage of black voters, also vote Republican down-ticket, the GOP will take back the US House and increase their numbers in the US Senate.

2 months to go, let’s keep our head down and finish strong through the finish line.

Pray, register, vote, and make sure everyone else does the same.

This is all we can do individually but will be the winning formally is done corporately.