Hey America, Minnesota could flip on November 3rd, which could pretty much seal up the deal for President Trump’s re-election.

Along with other states like Michigan, Pennsylvania, Ohio, Texas, Noth Dakota, and Oklahoma, the message is going out loud and clear. A Biden Presidency’s radical environmental regulations must be stopped, and the only way would be a vote for President Trump.

These “Green Policies” would dismantle the gas, oil, coal industries thus eliminating all their good-paying jobs.

With this in mind, Six Democratic mayors from the Minnesota Iron Range Region have endorsed Trump. This section has the iron mines in it and has been ignored by Democrats for years. They have always voted Democrat but not anymore. 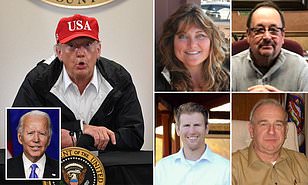 Now, they are not only voting for Trump but are voting against Democrats who have forgotten them.

Like many in our region, we have voted for Democrats over many decades. We have watched as our constituents’ jobs left not only the Iron Range, but our country. By putting tariffs on our products and supporting bad trade deals, politicians like Joe Biden did nothing to help the working class. We lost thousands of jobs, and generations of young people have left the Iron Range in order to provide for their families with good paying jobs elsewhere. Today, we don’t recognize the Democratic Party. It has been moved so far to the left it can no longer claim to be advocates of the working class. The hard-working Minnesotans that built their lives and supported their families here on the Range have been abandoned by radical Democrats. We didn’t choose to leave the Democratic Party, the party left us.

They acknowledged their decades-long support for Democrats but now will vote Republican.

None of them have said anything about switching parties but the endorsements will be a great help. They note Trump’s tax cuts and the fact that Biden is out of touch as their reason. Democrats have been trying to close all of Minnesota’s mines. Biden told the miners to learn to code, but his party brings in foreigners to do that.

The Iron Range region depends on mining. Should the Democrats halt that, those cities could disappear. The mayors are fighting for the future of their homes, but Democrats don’t care. Ideology over people. They live and die by that rule.

Trump always stands up for the little guy. Sometimes when a little guy doesn’t realize he is a little guy, he can do great big things. this country was built on that concept. It is what makes America great. Democrats think it’s a government that makes the country great, but they are dead wrong. They forget the people are the government but not the other way around.

Trump’s iron and steel tariffs have given the region a second life but Biden would drop them back down.

Plus, his energy policy would make the manufacture of steel and iron products too expensive. We would lose all of the manufacturing jobs the President has brought back to this country.

The Obama/Biden administration said those jobs were never coming back, but they were wrong again.

“We About to Go Get that MotherF***er! – It’s Time for Revolution!” BLM Threatens to Rip President Trump from White House