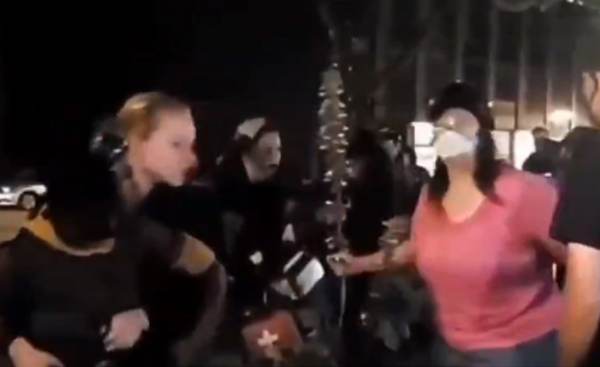 ‘LET THE WHITE MAN DO IT’: Debate Breaks Out at Portland Riot Over Which Race Should Assault ‘Homophobic’ Man

Anarchists have taken over the streets in Portland.

1: a person who rebels against any authority, established order, or ruling power
2: a person who believes in, advocates, or promotes anarchism or anarchy especially: one who uses violent means to overthrow the established order
Hundreds of misguided, angry, and entitled young adults in Portland are suffering from Arrested Development – A state where development has stopped prematurely.

Either through physical or emotional abuse, people with this condition are physically grown but internally did not develop emotionally.
In effect, you have college-aged adults, who have the emotional maturity of small children. So how do disturbed small children act, they react violently when they don’t get their way, join others to pick on those targeted by the group and will not accept disciple without huge conflict. Screaming when unhappy regardless of the setting or locations they are at.
This what you have seen play out in Portland streets. Here is a story in which a black anarchist punches another black man, for being a homosexual. Then the mob has to decide what color the person beating up the other guy should be!
Gateway Pundit

A bizarre and violent incident at the Portland riot on Saturday night highlighted the absolute absurdity of the racial politics within their own movement.

During the riot, a man who goes by the name “Princess” was punched by a fellow Black Lives Matter supporter, allegedly for being gay. Both of the men were black.

The man had been homophobic, they said, and that was “problematic.”

Rioters mobbed the man and surrounded him, until a debate broke out amongst themselves over which race should be the one to assault him. Some seemed to think a black man should be the one to do it, since the man they wanted hit was black and a white man hitting him would be inappropriate. Others have been pushing the idea that white people should be used to commit crimes and violence, so that black people are not the ones arrested. This has seemed to be a fairly common theme of disagreements among the leftist militants in general.

A woman stood in front of the man, seemingly attempting to prevent further violence, but a black woman could be heard and seen shouting “let the white man do it,” over and over.

For the rest of un not in Portland and the few other cities under Facisist control, we need to solidify out cities and states, get our children out of our public schools or least fix the curriculum, and classify these groups and Domestic Terrorist. Come down hard on them with our local police and restore law and order.