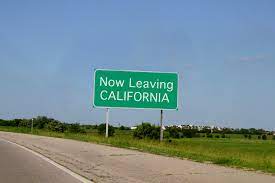 In 1988, a young man from the midwest entered the huge and growing state of California on his way to continue his military service in Orange County. That young man was me and it seems like yesterday.

I was blown away by the fast pace and apparent wealth of those enjoying their lives under the last year of the Ronald Reagan presidency.

There were jobs everywhere and the population was growing in leaps and bounds.

California’s population growth was particularly strong from 1985 to 1990, averaging 2.5 percent. This was about three times as fast as the rest of the country.

Under the Marxist policies of Governor Gavin Newsome, Californians have been leaving the state in the pursuit of the American dream. They are heading primarily to states with conservative Republican leadership including Tennessee, Texas, and Florida.

California’s first population decline in the state’s history took place in 2020. The population declined by 182,000 between 2020 and 2021. The AP reported at the time that California had been experiencing a net-negative migration in recent years, as more residents moved out of the state than in.

The population of the State of California has now declined for the second consecutive year, according to new data released by the state.

The California Department of Finance said in a report Monday that the state’s population declined by 117,552 residents in the year 2021, bringing the state’s total population to 39,185,605 people as of January 1, 2022.

The report showed that much of the state’s “plateauing” population growth was due to a continuing slowdown in natural increase. “As Baby Boomers age, and fertility declines among younger cohorts, the continuing slowdown in natural increase — births minus deaths — underlies the plateauing of the state’s population growth,” the report said. Other factors included COVID-19 deaths, federal immigration restrictions, and residents migrating out of state.

In part, due to the lower costs of real estate, the population growth “remained strong in the interior counties of the Central Valley and the Inland Empire,” the report said.

The report also noted that every coastal county lost population except three: San Luis Obispo, Santa Barbara, and Santa Cruz. The reason for the increases in those counties was partially due to the large number of college students returning to campus post-COVID-19.

The dormitory population has since returned to 98.9% of 2020 Census levels, with about 240,000 students living in dormitories, “restor[ing] the populations in many college towns.”

“To a certain extent, we have two or three things happening here — the pandemic is there in the sense that natural increase, it really slowed down over these two years. Some of that is a lack of births because of delayed child-bearing decisions,” Department of Finance Chief Demographer Walter Schwarm told the Los Angeles Times. “Things are getting a little better, fertility is coming back after the pandemic.”