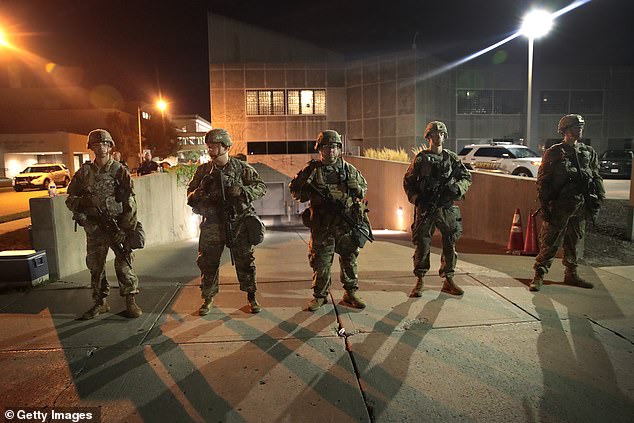 It is amazing what happens in a community when it decides, enough is enough.

Most small to mid-size communities don’t have the resources to handle organized anarchist groups rolling into town, especially without any notice.

Since ANTIFA and BLM have their own set of rules, the local police are dealing with people who don’t care if they go to jail and with not much to lose.

These thugs come rolling in from out of town, as shown in the police press release over the weekend. Over 60% of the arrests so far are of people not from Kenosha, sounds familiar, doesn’t it?

Kenosha, WI welcomed the national guard’s arrival and help root out the agitators who have been lingering for days. NBC Chicago reports that over 1,000 Wisconsin National Guard members are now in the city and are “being aided by military police from National Guard units stationed out of Arizona, Michigan, and Alabama, according to Kenosha officials.”

The results, the streets were visibly calm in Kenosha, Wisconsin, Monday night — the night before President Donald Trump’s scheduled visit to the area.

A huge improvement over last week, which saw several nights of tense protests hallmarked by burning buildings and lawless demonstrators in the streets. Authorities appeared to have clear control of the streets, guarding the county courthouse and enforcing the city-wide curfew, which will remain in effect until Labor Day according to a Facebook post from the Kenosha Police Department.

Footage posted to Twitter shows bare streets with what appears to be unmarked police vehicles patrolling the area:

The National Guard is rolling into Kenosha. As am I #Kenosha #KenoshaProtests pic.twitter.com/mDP1ZNvBqO

Kenosha Police in an unmarked van are combing through downtown, shining spotlights on one of the gas stations patrolled by those militia groups just a few days ago #Kenosha #KenoshaProtests pic.twitter.com/9x1IEpoYh4

Some of the rioters torched businesses, leaving their owners in a state of despair. “It’s sickening. This is sickening. This is disgraceful, and this is not going to solve any problems,” one woman, whom BlazeTV’s Elijah Schaffer identified as a business owner, said.

“My God. A person that has worked 50 years in a furniture store has nothing and because why?” she asked. “Because a police officer made a bad choice. Don’t take it out on innocent people. All we want to do is make a living and come to work and help people”:

“This is disgraceful & it’s not going to solve any problems”

A frustrated business owner tells me outside her vandalized business

“We are in hard times, you are making this harder than it has to be”

This is the human collateral of the #KenoshaRiots the corporate media ignores pic.twitter.com/Qkc5Hm7FpP

“It’s emotionally hurtful, but we didn’t do anything to anybody. Why did we deserve it?”

Near tears, a store owner explains how his family business of 40 years was destroyed by #BLM & Antifa arsonists last night

It is sad it took the destruction of these local businesses and loss of life to finally get the Governor and the elected officials to allow for help in restoring law and order.

The odds are, as soon as there is another situation flare up around the US, you will see the Soros team forget Kenosha, Wisconsin, as it served its purpose, it advancing their goal of burning down the system, one street tat a time.

With a Trump second term, the federal government can use even more of its resources to shut down the domestic terrorist, and the globalist plans will go up in smake, not more businesses.