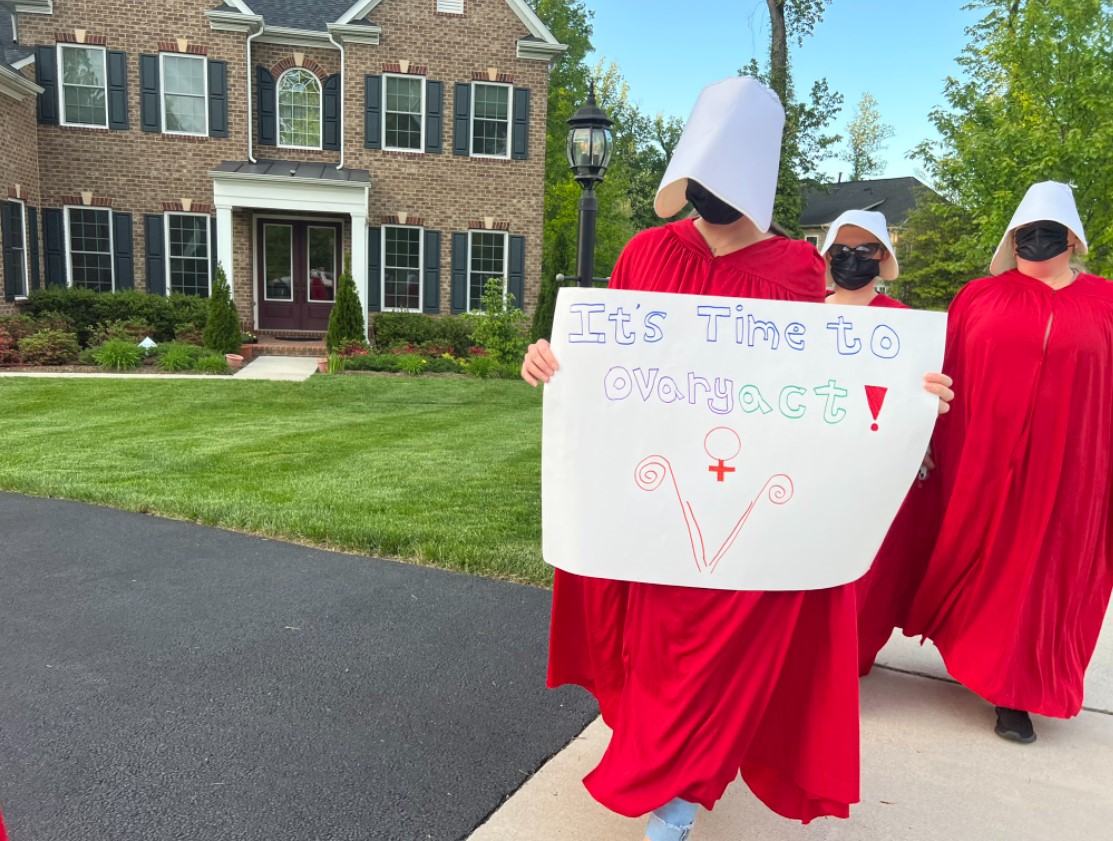 On May 2nd, Politico published a leaked draft of a Supreme Court decision, authored by Justice Samuel Alito, on the Dobbs v. Jackson Women’s Health Organization case, originating out of the state of Mississippi.

The pro-abortion mob immediately dispatched protesters to the homes of the 6 conservative justices on the court, in violation of federal law.

On Wednesday, a small group of protesters gathered outside of Barrett’s home in Virginia. The demonstrators were dressed as characters from “The Handmaid’s Tale.”

According to the Daily Signal, just seven protesters showed up. They demonstrated outside of Barrett’s residence for just 10 minutes, the news outlet said, before they departed the Falls Church, Virginia, neighborhood.

“It’s none of their business, why are they are here?” said a neighbor who spoke to a reporter. He also affirmed that it was “inappropriate” to protest outside Barrett’s home.

“They have the right to protest but not in front of someone’s house. They live here— this is where she lives,” he added. “They shouldn’t be doing this.”

The man then offered the protesters unsolicited advice. “Go home and get a family,”

Spoke with one of Justice Barrett’s neighbors. He says the protestors should “Go home and get a family.” pic.twitter.com/wBWLWOJfAt

The First Amendment affords citizens extensive free speech rights however protesting outside the personal homes of those involved in legal cases, in an apparent attempt to pressure them into acquiescing to your demands has been determined by the courts to not be protected speech.

Specifically, federal law 18 U.S.C. §1507 — part of a chapter on obstruction of justice — appears to outlaw exactly what pro-abortion protesters have been doing.

Whoever, with the intent of interfering with, obstructing, or impeding the administration of justice, or with the intent of influencing any judge, juror, witness, or court officer, in the discharge of his duty, pickets or parades in or near a building housing a court of the United States, or in or near a building or residence occupied or used by such judge, juror, witness, or court officer, or with such intent uses any sound-truck or similar device or resorts to any other demonstration in or near any such building or residence, shall be fined under this title or imprisoned not more than one year, or both.

“The statute would seem to apply both because … they appear to be picketing and parading with the relevant intent and at the relevant locations,” Abu El-Haj said, “but also because the statute has a catchall ‘resorts to any other demonstration in or near any such building or residence.'”

Virginia has a law on the books outlawing this type of protest.

Virginia Gov. Glenn Youngkin (R) and Maryland Gov. Larry Hogan (R) are urging the Justice Department to end the protests outside of the justices’ personal homes.

So far the DOJ has been absent even though federal law is being broken.