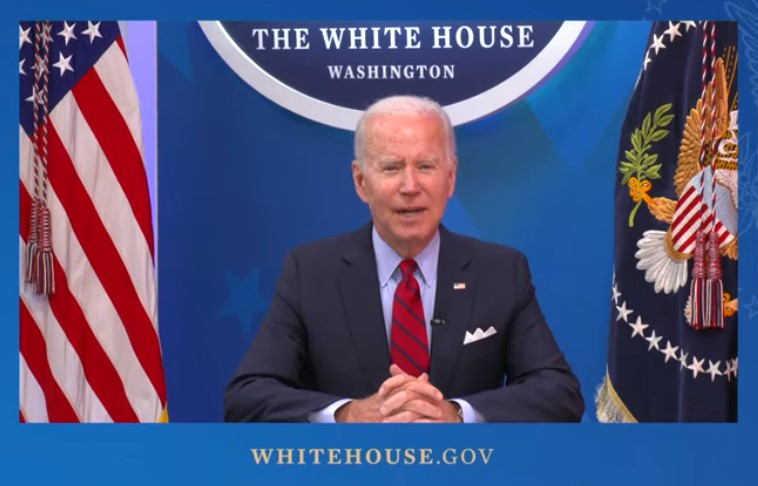 President Joe Biden on Friday again expressed his outrage at the Supreme Court’s decision to overturn Roe v. Wade and pleaded for Americans to elect more Democrats in November.

“This tragic reversal of Roe v. Wade, a terrible, extreme decision, upending lives and impacting the health and safety of millions of women. I share the public outrage that this extremist court has committed to moving America backward with fewer rights,” Biden said.

President Biden: "This tragic reversal of Roe v. Wade, a terrible, extreme decision, upending lives and impacting the health and safety of millions of women. I share the public outrage that this extremist court has committed to moving America backwards with fewer rights." pic.twitter.com/s4t17HiH0M

The president held a video conference call with Democrat governors to discuss the importance of preserving the “right” for women to abort their unborn children. In the past week, Biden has been under fire from leftist Democrats and pro-abortion activists who are displeased by his lack of fervor on the issue.

Biden again vowed to do “everything within the power of the federal government” to protect the right for women to seek abortions in other states but said that it was up to Congress to pass a law to make abortion legal across the United States.

“Ultimately, Congress is going to have to act to codify Roe into federal law,” Biden said. “As I said yesterday, the filibuster should not stand in the way of us being able to do that, but right now we don’t have the votes in the Senate to change the filibuster at the moment.”

Biden noted that two more Democrats were needed to codify Roe v. Wade in the United States Senate as well as a Democrat majority in the House of Representatives.

Because the left wants power, and they want everyone on board their radical Marxist train to deconstruction, for Democrats it’s either their way or the highway. The president implied that the 2 Senators need to go.

He said that it was more important than ever to elect members of Congress who would be willing to act to make abortion legal nationwide.

In his weak, insecure voice Biden said; “This is not over,”

In trying to prevent his request from being shot down, he clarified, “Not for abortion but for family planning,”

The president had to throw in some typical language trying to scare Americans. He said they would be “shocked” by the ramifications of the Supreme court’s decision, warning that states might try prosecuting women who traveled to other states to get abortions.

But then Joe quickly retracted the warning, strangely, by saying “I don’t think people believe it’s going to happen but it’s going to telegraph to the whole country that this is a gigantic deal that affects all of your basic rights,”

The Democrats obviously don’t have anything to run on, so it looks like Abortion will be their go-to for the foreseeable future.