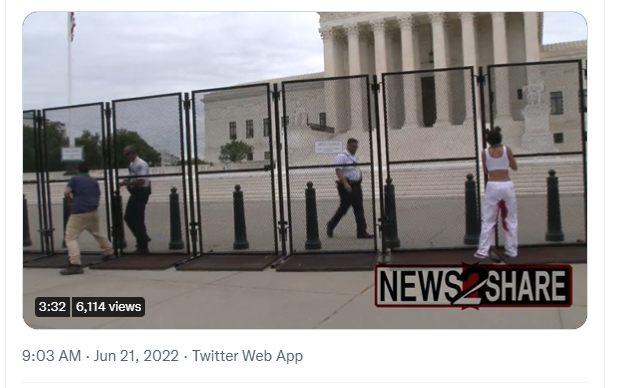 Embedded in the crowd that day were FBI agents, ANTIFA & BLM members, and the media.

The Capitol Police acknowledged members of The Late Show with Stephen Colbert were arrested that day in a statement released last week.

“The building was closed to visitors, and these individuals were determined to be a part of a group that had been directed by the USCP to leave the building earlier in the day,” the statement continues.

“They were charged with Unlawful Entry. This is an active criminal investigation, and may result in additional criminal charges after consultation with the U.S. Attorney,” it concludes.

CBS acknowledged that a production team involved in filming segments featuring Robert Smigel, known for being the creator, puppeteer, and voice of Triumph the Insult Comic Dog, was detained by Capitol Police.

So who invited the media to show up in order to report on what was about to go down?

As a result of officers opening the doors, letting peaceful protesters into the building, followed by the lunatics, nationally televised hearings trying to assign the blame and responsibility for the events that day, are still underway this week.

A group of angry, violent leftists stormed the barrier outside the US Supreme Court.

VIDEO This morning two abortion access activists jumped over the barricades around the Supreme Court and handcuffed themselves to the fence.

"Overturn Roe? Hell no!" they chanted.

One had pants stained to resemble blood and "not government property" written on her stomach. pic.twitter.com/ndEDvu1SIM

So will they be placed into solitary confinement without due process too?

The day started out tense as a group of VERY radical pro-abortion activists showed up early, ready to cause havoc if the Court’s decision, ending Roe, was announced before noon.

A pro-abortion protester heckles at activists with Students for Life, she tells them to “suck my dick, bitch” and mimics jerking off.

Hard to hear, I think she said,
“You will not take my right away! I will always get an abortion! I’ll go in a back alley and will fucking die!” pic.twitter.com/5LDKPahzK0

This pro-abortion activist grew angry with a pro-life activist and began dancing provocatively at her pic.twitter.com/juVp2ja1Yj

In the end, The Supreme Court did not release its decision again.

With each passing day that Chief Justice Roberts delays the release of the court’s ruling on Dobbs v. Jackson Women’s Health Organization, the tension increases.

This delay I believe has, and continues to be a mistake, considering that if Roe is overturned in their ruling, it will provide unwarranted excuses for the pro-abortionist to act out violently.

I say, release the ruling, and let law enforcement take care of business by maintaining law and order.