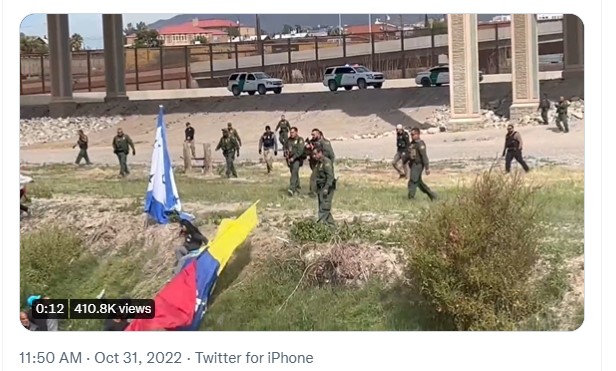 On Monday, tensions flared up at the U.S.-Mexico border, this time along the Rio Grande in El Paso, Texas.

They were previously sent back to Mexico in mid-October with many of them staying in border cities, hoping the Biden administration changes their policies, letting them in.

In Juárez, dozens have been sleeping on the south banks of the Rio Grande.

A video captured by the El Paso Times on Oct. 31 shows dozens of Border Patrol agents and support personnel forming a line along the border near the Loop 375 overpass south of the Chihuahuita neighborhood and the railroad tracks to push the migrant group back to Mexico.

One migrant waves a large Venezuelan flag as he retreats into the low-running river and can be seen jabbing the flagpole toward agents.

Hutchens later confirmed agents used a “less-lethal force pepper ball launching system.” The incident is under review by the U.S. Customs and Border Protection Office of Professional Responsibility, he said. “One of the protesters assaulted an agent with a flag pole,” Hutchens said in an emailed statement. “A second subject threw a rock causing injury to an agent at which time agents responded by initiating crowd control measures.”

“We have a responsibility not only as migrants but as human beings to do something for our brothers,” Márquez said. “There have always been injustices, everywhere, along the border with the migrants. Now I think is the time for us to raise our voices to say what we need to say.”

NEW: Longer video provided by activist at scene shows incident in El Paso yesterday where Border Patrol agents fired pepper balls at a group of Venezuelans crossing illegally into the U.S.
CBP says a thrown rock injured one agent, & another was assaulted with a flagpole. @FoxNews pic.twitter.com/t7FrGjnAtb

This growing tension on the border must be addressed immediately following the GOP taking control of both chambers of the U.S. Congress on January 20th, 2023.

DHS Secretary Mayorkas must be impeached, and funding to complete the wall must be passed, forcing Biden to decide if he wants to protect Americans for once by signing the bill into law.

Justice Thomas Challenges Colleges During Arguments Over Affirmative Action
Dr. Phil Tells Rogan: ‘Hell No’ You Wouldn’t Get On A Plane If John Fetterman Was The Pilot