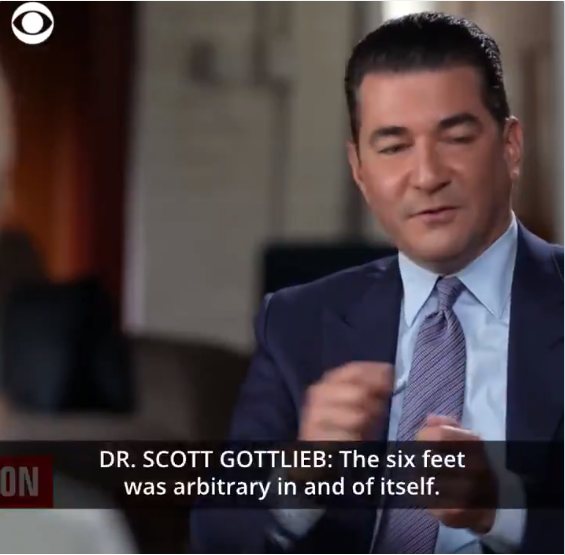 Many of us asked, why 6 feet? Dr. Fauci was flip-flopping on wearing masks so maybe he would change this requirement too.

As a result of this arbitrary number, business occupancy numbers plummeted as businesses had to factor in how many customers could be in their businesses, per square foot, trying to hit the 6-foot ratio.

Come to find out that this number was not correct after all. The actual number the CDC wanted was 10 feet, can you imagine what this additional distance would have done to our culture?

One of former President Trump’s commissioners of the Food and Drug Administration, Dr. Scott Gottlieb, told CBS’ Face the Nation Sunday the six-foot social distancing rule created to slow the spread of the coronavirus was “arbitrary” and has decreased confidence in the pandemic response. Dr. Gottlieb also admitted that “nobody knows where it came from.”

Gottlieb also said no one knows where it came from, as the original proposal was 10 feet.

Former FDA commissioner @ScottGottliebMD calls CDC’s six-foot distancing recommendation “arbitrary” and “a perfect example of sort of the lack of rigor around how CDC made recommendations.” pic.twitter.com/2Xf4vrz6Ec

Speaking with Face the Nation’s Margaret Brennan, Gottlieb also discussed the rules and risks early in the pandemic, explaining that the Trump administration shifted its focus to the impact lockdowns and rules would have on the economy and children.

“My view is that they were sold on the idea that you weren’t going to be able to really affect the spread and that anything you did was just going to have so many repercussions in terms of impact on children who might not be in school. Impact on the economy, that the costs were worse than the disease,” he said, explaining that schools were a “perfect example of the lack of effective policymaking.”

“So the single reason why most schools remained shut was that the CDC (Centers for Disease Control and Prevention) was telling them they had to keep kids six feet apart.”

“If- if CDC has said you can only- you have to keep kids three feet apart, then a lot of schools would have been able open.”

“And in fact, when the Biden administration wanted to open schools in the spring, this past spring, they got the CDC to change that guidance from six feet to three feet,” admitting the original guidance was “arbitrary” and had unknown origins.

“The six feet was arbitrary in and of itself, nobody knows where it came from,” he said. “The initial recommendation that the CDC brought to the White House and I talk about this was 10 feet, and a political appointee in the White House said we can’t recommend 10 feet.”

“Nobody can measure 10 feet. It’s inoperable. Society will shut down. So the compromise was around six feet. Now imagine if that detail had leaked out. Everyone would have said this is the White House politically interfering with the CDC’s judgment,” he continued:

The CDC said 10 feet, it should be 10 feet, but 10 feet was no more right than six feet and ultimately became three feet. But when it became three feet, the basis for the CDC’s decision to ultimately revise it from six to three feet was a study that they had conducted the prior fall. So they changed it in the spring.

They had done a study in the fall where they showed that if you have two masked individuals, two people wearing masks, the risk of transmission is reduced 70% with masks if you’re three feet apart. So they said on the basis of that, we can now make a judgment that three feet is an appropriate distance.

Those decisions, he added, easily undermine Americans’ confidence in advice from public health officials. “This is how the whole thing feels arbitrary and not science-based. So we talk about a very careful, science-based process and these anecdotes get exposed, and that’s where Americans start to lose confidence in how the decisions got made,”

Just as the masks and forcing people to stay 6 feet apart, without any empirical science, has discredited Faicu and the entire gang in DC.

It’s time, send everything back to the states and let them determine the best policies for protecting their state’s constituents.

“I Was Feeling the Spirit – I Wasn’t Thinking About a Mask” – San Fran Mayor Defends Violating Her COVID Order
COVID Madness! Lying White House: Illegal Aliens Don’t Need Proof of Vaccination Because ‘Not Intending to Stay’