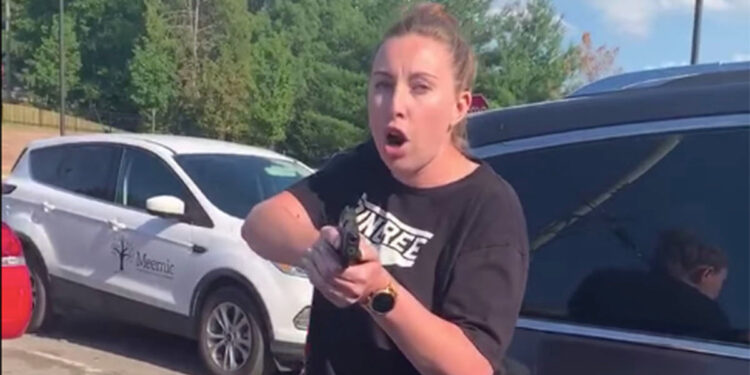 With all of the chaos taking place around the country, I and tens of thousands of American’s just purchased our first weapon. Hoping to never use it, I have been getting comfortable with loading and shooting the 9mm just case I am attacked.

In Atlanta, there was a police shooting of Rayshard Brooks. The officer fired back after a taser was shot at his head, but surprisingly the DA charged the officer with murder anyway. I am looking for clarification, at what point can you actually use your weapon. Do you wait until your head is getting beat into the ground first, or are we expected to take verbal abuse, threats, and allow our cars to get hit, in order for others to express themselves?

Case in point, earlier this week, Eric and Jillian Wuestenberg, a married couple from Oakland Couty, Michigan, went to a local Chipotle for some food, what they got when leaving would change their lives forever. A middle-aged black woman accused the pregnant white woman of bumping into her 15-year-old daughter near the entrance of the restaurant and demanded an apology.

Mrs. Wuestenberg tries to deescalate the situation and quietly leave the shopping area with her husband. The black woman and daughter, cell phones recording, temporarily block her path to the van, accusing them of being racists. With them not getting their way, the black mother and daughter’s voices got louder. As Mrs. Wuestenberg is getting in their van the black woman called her a “dumbass bitch.”

The situation starts to heat as they then pulled the husband into the verbal attack too. After closing his wife’s door, Eric starts to head over to the driver’s side and is threatened, by the now angry woman: “And if you say something I’ll beat your white ass too.”

As the white couple starts backing up their vehicle to leave the parking lot, the black woman rushed behind the SUV to block them from leaving and accused them of ‘trying to hit her.’ The black woman then pounded on the vehicle and threatened to beat them.

At this point, the terrified threatened pregnant white woman, not sure what this aggressive woman will do next,  jumps out the van with her handgun. With shaking, hands screams: “Get the f*ck away!” “Back the f*ck up!” Even with the handgun in her face, the black woman keeps recording the event.

After a minute, the couple gets back in their van and drives off. I don’t know what I would have done differently in the same situation.

Just like the previous Atlanta Police officer shooting, this couple is now having their world turn upside down when it appeared they followed the law. Believe it or now, this Oakland County, Michigan couple was charged with felony assault on Thursday after the video of the event went viral.

The couple was arraigned Thursday at 52-3 District Court in Rochester Hills.

“As part of the bond conditions, they must turn over all firearms, not engage in any assaultive behavior, and may not leave the state,” sheriff’s officials said.

The incident stemmed from a bump and lack of apology, according to Bouchard.

“Let’s have a little more tolerance for each other and not being so quick to react,” Bouchard said. “If someone is doing something improper or unfair, I tell my family and friends to look away. This is not the moment to plant your flag.”

In response to the viral video, Eric Wuestenberg was fired from his job at Oakland University

We have seen the video and we deem his behavior unacceptable. The employee has been notified that his employment has been terminated by the university.

I lost some sleep over this situation as I imagine how I would feel if in the Wuestenberg’s shoes. This could have been my wife and me, if in the same situation. Until I find out what the police think should have been done, I will do my best to stay away from areas in which there are BLM activists, like this woman and daughter. Praying for peace in America.