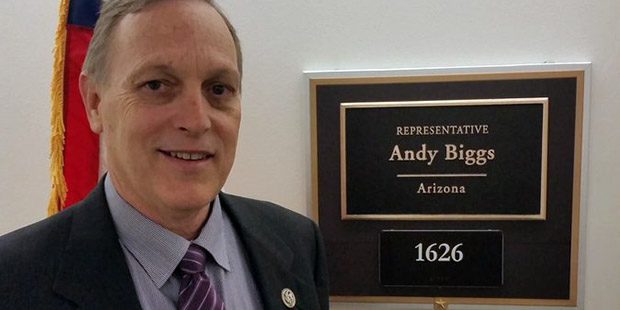 Enough is enough, according to Arizona Congressman Andy Biggs.

Rep. Biggs (R-AZ), along with countless millions of other Americans agreed to follow President Trump, as he requested in April, for America to basically shut down, but just until the “curve” flattened.

Soon after the shutdown and it became apparent the modeling numbers were way off.

The urgency for a shutdown came from bogus modeling numbers provided to the CDC, from  Neil Ferguson’s team at Imperial College London. Their model simulated 2.2 Million U.S. Deaths from COVID-19

This worst-case simulation came up with 2.2 million deaths by simply assuming that 81% of the population gets infected ­–268 million people– and that 0.9% of them die. It did not assume health systems would have to be overwhelmed to result in so many deaths, though it did make that prediction.

This meant by August millions of Americans should have died and our country in a total panic.

By June it was becoming very apparent, that except for those over 70, and living in senior care facilities, the risk of dying from CV-19 was no different than the annual flu season.

In addition, young children had a close to zero chance of succumbing to the virus from China.

The CDC reported that instead of millions of people, 98,536 Americans had died, many with COVID, some from COVID.

Representative Biggs decided to call out Arizona’s leaders, asking them to wake up and listen to their consultants, those who wanted freedom over tyranny.

America, and my home state, Arizona, are at a crossroads. We have two roads we can take. One is a return to the path of freedom; the other is totalitarianism. This is not necessarily a partisan issue or even a left/right problem. It is a potential permanent alteration of who we are as a people.”

Nothing typifies this more fully than the mandates to wear masks that some governors and mayors are imposing on their citizens. That so many in our country are immediately acquiescent in the broad implementation of mandated masks reveals that we may have lost our way, perhaps irretrievably.

An authoritarian leader typically exercises broad and seemingly endless power. The only two limitations that prevent abuse are the personal conscience of that leader or a rebellion by the people.

Leaders of a free people are elected and have a limited scope of authority delegated to them by those people and which are set forth in a charter. Our charter, of course, is the Constitution, which was designed to implement the principles of the Declaration of Independence.

Fast forward to September 8th, and Rep. Biggs is telling the people of Arizona that it is time to “unmask” and reject “oppressive” shutdown mandates related to COVID-19 mass hysteria.

Government bureaucrats have taken enough freedoms away from us. No more. #UnMaskArizona pic.twitter.com/hS053SP6np

It’s time for a new approach in AZ, one that values & protects all life. We must give hope to the public & set forth a plan to reopen the economy & remove oppressive gov't restrictions.

Right now, the cure for COVID-19 has proved worse than the disease itself.#ReOpenArizona pic.twitter.com/7VyWItSn3X

“In Arizona, we are seeing tremendous government overreach. The universal mask policies cross the line. The leaders who make these orders are abusing their power and reaching into the private domains of their citizens. On this issue, they certainly resemble autocrats rather than public servants,” Biggs wrote in an op/ed published in June.

“As we look at the fork in the road, something seemingly so simple as a universal mask mandate symbolizes where we can choose to go: on a path of renewed freedom or down the path of untethered government control of every aspect of our lives, which will surely lead to ruin,” he added.

Time has proven Biggs’ words to be correct. It is time to end the lockdown policies and end the insanity before the Bill of Rights and Constitution are destroyed forever.