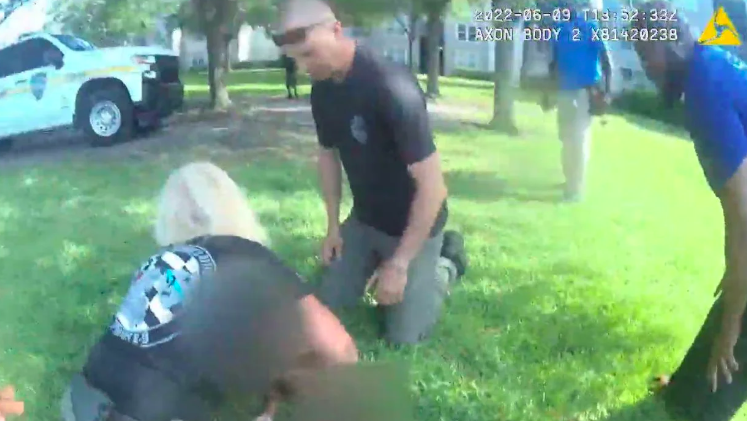 The men and women who serve in law enforcement are crucial to maintaining law and order in communities, thus carrying the title of peace officers.

A Florida officer is being praised as a hero after she jumped into a retention pond to rescue a drowning infant, putting her own life at risk because she didn’t know how to swim, authorities said Tuesday.

Officer Me’Atia Sanderson with the Jacksonville Sheriff’s Office was the first to arrive at the scene on June 9, the sheriff’s office said.

She was alerted that the infant was still in the water.

The sheriff’s office released body cam video of the rescue on Tuesday.

“Sanderson, who does not know how to swim herself, without a second’s hesitation, entered the pond to retrieve the child and performed CPR until she was relieved by other responding officers,” the sheriff’s office said.

Video shows Sanderson, who joined the sheriff’s office in 2019. sprinting into the water and make her way to the drowning child. After the child was pulled from the water, Sanderson continued life-saving efforts.

“Come on, baby,” the officer can be heard saying as she performs CPR. “Come on!”

The footage ends when two other officers arrive at the scene and take over CPR efforts.

Officials with the sheriff’s office said Sanderson has been recognized for the impact that her “quick and decisive decision to go into the retention pond” made.

“Her actions, while putting her own life at risk, undoubtedly saved the child’s life,” the department said.