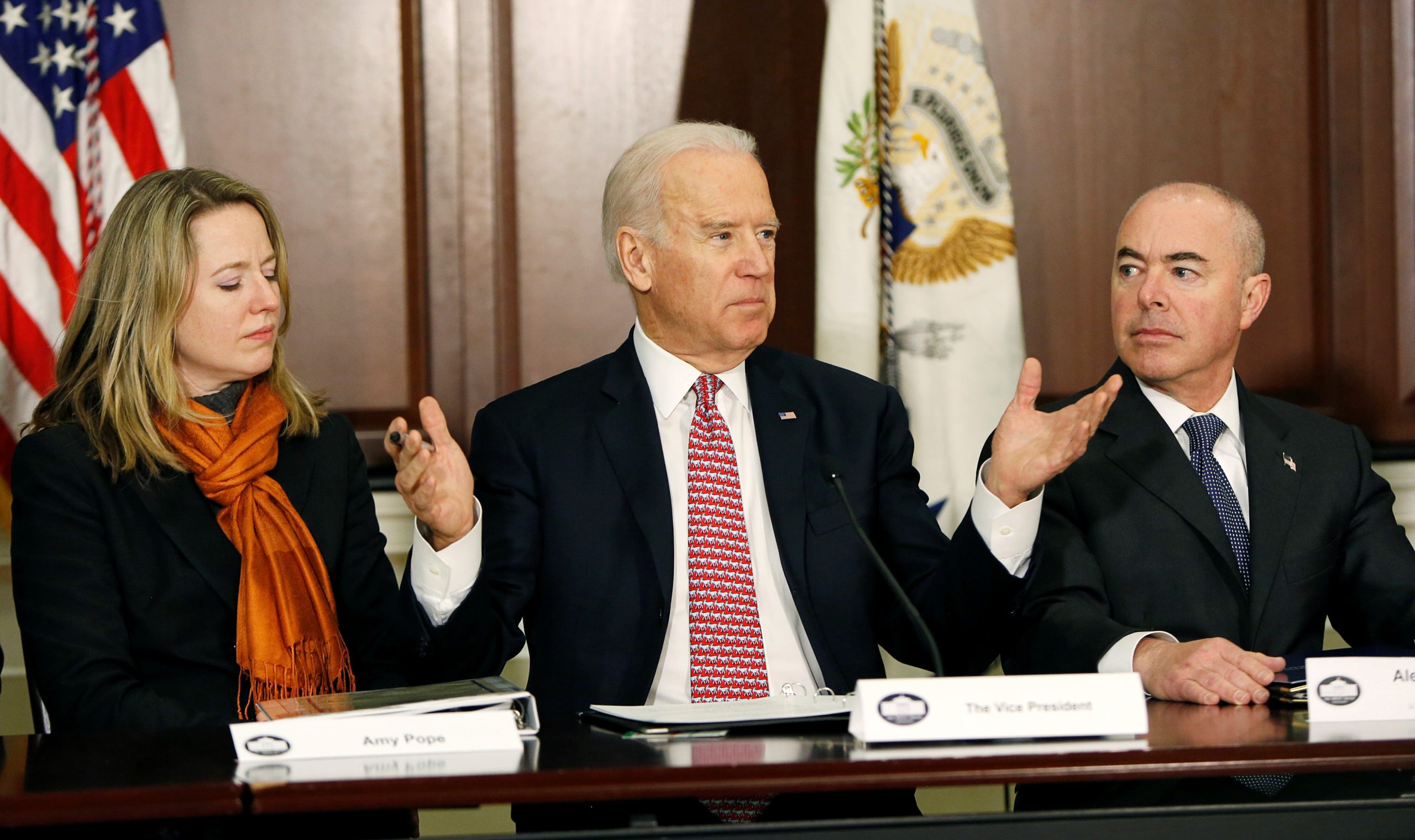 In anticipation of the GOP taking back control of the US House of Representatives on January 3, 2023, the Republican leadership is laying out their agenda before heading home for Thanksgiving.

In addition to investigating President Biden’s business dealings with his son Hunter, and Dr. Anthonly Fauci over COVID-19, President Joe Biden’s border chief Alejandro Mayorkas, the Communist Cuban-born, pro-migration secretary of the Department of Homeland Security (DHS) will be investigated and possibly impeached, for refusing to enforce Congress’ immigration laws, GOP legislators said at a Tuesday press conference at the border.

“If Secretary Mayorkas does not resign, House Republicans will investigate, every order, every action, and every failure will determine whether we can begin impeachment inquiry,” McCarthy said at a press conference in El Paso, Texas, on Tuesday.

House Minority Leader McCarthy first appeared to open the door to impeachment of Mayorkas at another press conference in April.

“This is his moment in time to do his job. But at any time if someone is derelict in their job, there is always the option of impeaching somebody,” McCarthy said at an April press conference in Eagle Pass, Texas.

Several GOP-backed lawsuits have been already been filed for refusing to enforce the laws.

The suits say Mayokas violates his legal duty to detain asylum seekers until their pleas are decided, and he allows hundreds of thousands of migrants through the “immigration parole” door designed for a few emergency cases.

The Supreme Court is expected to soon hear an asylum case brought after Security Mayorkas issued a “guidance” memorandum instructing immigration personnel to essentially stop the enforcement of those laws against broad categories of aliens. This includes legal and illegal aliens involved in sex trafficking, selling drugs, prostitution, and certain gun crimes.

The highest court in the land will decide whether the Biden administration must detain and deport certain types of aliens – both legal and illegal – which would instantly force Joe Biden’s immigration policy to resemble Donald Trump’s policy on those issues.

Congress specifically orders in immigration law that aliens (i.e., noncitizens) who commit certain crimes must be detained and deported. Those provisions of the law include 8 U.S.C. §§ 1226(c)(1), 1231(a)(2), and 1231(a)(1)(A), which use language like the attorney general “shall take into custody,” “shall detain,” and “shall remove” aliens that commit these different categories of criminal acts.

Mayorkas is also being sued for giving work permits to foreign workers who enroll at U.S. universities.

The GOP’s investigation of  Mayorkas’ compliance with the law has the “potential to just be a shiny object to distract their constituents,” said Mark Krikorian, the director of the Center for Immigration Studies.

“Shining a light on the widespread disregard of the law by Biden’s DHS serves an important function. Maybe we can get the issue of immigration parole and its abuse into the broader discussion. It’s a key problem and it is one of the important ways this administration is creating a parallel, off-the-books [“safe, orderly and humane”] immigration system –[and is]  just letting in people even though they have no right to be let into the United States. I hope they don’t use [this issue] as a way of mollifying angry constituents without actually doing anything else,” Krikorian added.

Mayorkas has allowed millions of unknown economic migrants to invade the US southern border.

According to a FAIR (The Federation for American Immigration Reform) Analysis, 5.5 Million Illegal Aliens Have Crossed our Borders Since Biden Took Office. They are asking; How is Secretary Mayorkas Still Employed?

Mayorkas’ agency announced on Tuesday that he has no plan to resign:

"Secretary Mayorkas is proud to advance the noble mission of this Department, support its extraordinary workforce, and serve the American people. He has no plans to resign." pic.twitter.com/OqKxdS7LsH

The GOP leaders laid out their legal arguments at their press conference in Texas.

“His deliberate suspensions of our laws have proved deadly — fentanyl is now flowing in in record amounts,” said Rep. Kevin McCarthy (R-CA), the likely House Speaker in 2023. “He has blocked ICE [and the] Border Patrol from enforcing our laws while vilifying them at the same time.”

“The southern border barely exists anymore [because] the Border Patrol isn’t allowed to do their job,” said Rep. Brian Babin (R-TX). “This administration has tied their hands so tight that catch-and-release sometimes is their only option at this point,” he said.

“If you simply send people back … If simply you stopped tying the hands of ICE, people will stop coming,” McCarthy said.

A reporter asked McCarthy what laws Mayorkas may have violated.

McCarthy replied, “withholding ICE from doing their job, not following through on what the laws or the books are today.”

“We never do impeachment for political purposes — we’re having an investigation,” McCarthy added.

“This is their crisis,” said Babin, adding:

“They own it. And there is nothing humane or compassionate about it at all. Migrants are dying, border agents are dying, Texas Army National Guard members are dying, and American citizens are dying. The entire situation is devastating and Biden and his administration simply must be stopped.”

“Today, 300 Americans will be poisoned and die,” from illegal drugs smuggled across the border, said McCarthy, adding:

“Tomorrow, 300 more. It is the equivalent of an airline crashing each and every day in America. But again, [Mayorkas] does nothing. If an airline crash three days in a row the entire nation would say we have a real challenge. We have a crisis. We have a disaster. We have to do something about it. But he continues to lie to the American public … His actions have produced the greatest wave of illegal immigration in recorded history. Our country may never recover from Secretary Mayorkas’ dereliction of duty. This is why today I am calling on the Secretary to resign. He cannot and must not remain in that position. If Secretary Mayorkas does not resign, House Republicans will investigate every order, every action, and every failure will determine whether we can begin an impeachment inquiry.”