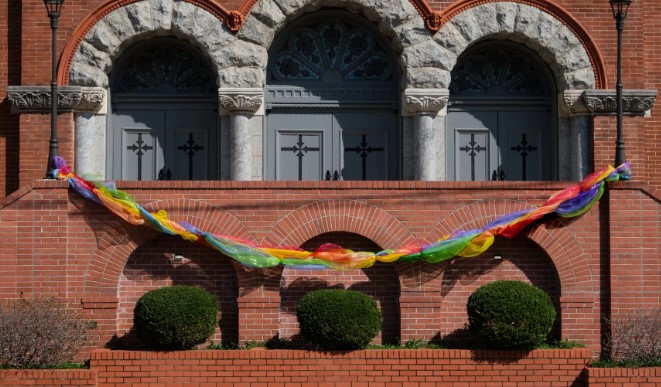 Throughout the Bible, the various inspired authors wrote concerning what would be the signs of the times before the return of Jesus Christ.

One of them included an increasing falling away from true Biblical teachings by those who would rather hear things that make them feel good about themselves, even encouraging them in their sins.

“ Preach the word; be prepared in season and out of season; correct, rebuke and encourage—with great patience and careful instruction.  For the time will come when people will not put up with sound doctrine. Instead, to suit their own desires, they will gather around them a great number of teachers to say what their itching ears want to hear. They will turn their ears away from the truth and turn aside to myths.” (2 Timothy 4:2-4)

In a few of the major denominations, apostates have taken over leadership positions, leading them to embrace aberrant teachings, such as God is love, so the scriptures that deal with sexual sins and judgment must have been misinterpreted.  They then updated their teachings to include more inclusive renderings of the scriptures.

Those in their denominations who still fear God, they’re rejecting this move by the leadership and are formally leaving the national organizations.

Seventy churches in Georgia split from the United Methodist Church (UMC) last week largely over LGBTQ issues, marking the latest in a growing divide within the third-largest Protestant denomination in the United States.

Last Thursday, The North Georgia Conference voted to “allow” the churches, most of which were in rural areas, to disaffiliate from the UMC.

In 2021, the Board of Trustees adopted a process and, along with District Superintendents, walked alongside the churches that requested to disaffiliate. The conference established ratification by the Annual Conference as the final step in that process.

During a special session in 2019, the UMC adopted a disaffiliation agreement allowing churches to leave the denomination through the end of 2023 “for reasons of conscience regarding a change in the requirements and provisions of the Book of Discipline related to the practice of homosexuality or the ordination or marriage of self-avowed practicing homosexuals as resolved and adopted by the 2019 General Conference, or the actions or inactions of its annual conference related to these issues which follow.”

So the Methodists which was started by the 18th-century English evangelist John Wesley is now a promoter of sexual sin.

The 70 churches that chose to bail only represent 9% of the congregations. The date of disaffiliation will be effective June 30, 2022.

After the vote, one of the wolves in sheep’s clothing, Bishop Sue Haupert-Johnson, and the members of the Annual Conference offered a prayer for the departing churches, some of which will remain independent and others that will dissolve.

Women are not permitted to serve as an elder in a Bible-believing church, and in apostate denominations, you will see lesbians promoted to be overseers, compounding the error. “I do not permit a woman to teach or to assume authority over a man; she must be quiet.” (1 Timothy 2:12)

Yet, instead of repenting, Haupert-Johnson prayed. “I pray that we will be partners in ministry and you will do your mighty work of healing division and overcoming rifts.”

For those who question why denominations are moving into social justice, and embracing sin, John warned that it would be a confirmation that we’re never Christians in the first place.

“Dear children, this is the last hour; and as you have heard that the antichrist is coming, even now many antichrists have come. This is how we know it is the last hour.  They went out from us, but they did not really belong to us. For if they had belonged to us, they would have remained with us; but their going showed that none of them belonged to us.” (1 John 2:17-19)