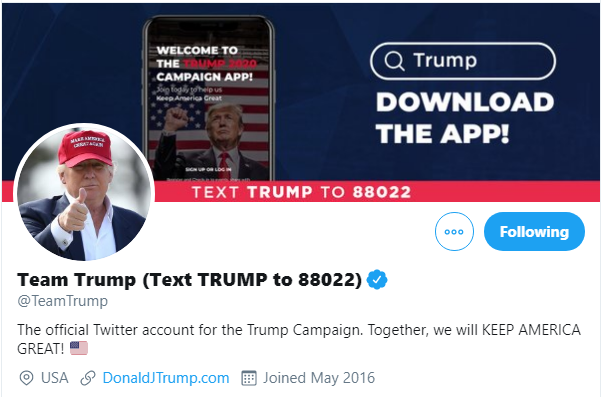 The social media world was shocked for a short period of time after a fake news newspaper, in its haste to get a scoop, falsely reported that Twitter had taken down President Trump’s personal page.  With an almost monopoly of all media platforms, controlled by far-left globalists, Twitter has stood out, for the most part, as an uncensored outreach for the President of The United States.

The Washington Post originally reported that Twitter banned President Trump over his tweet of a video clip of a Fox News interview in which he said children are “almost immune” from Covid-19.

For those of us heavily immersed in the political scene, this was not that shocking of a story as this idea of Twitter silencing the President on their platform, would make perfect political sense.

The mere idea of President Trump’s primary tool for communicating with then of millions of people, any time of the day, ending abruptly, would lift the spirits of those who themselves have never be able to use this political tool as effectively.

This is happening in an election year during a pandemic. Where is the DOJ? Where are the Republican lawmakers?

BREAKING: Twitter has banned President Trump from tweeting until he deletes a tweet about coronavirus the site says violates "rules against misinformation," according to the @WashingtonPost. pic.twitter.com/tyJQ27hM95

Twitter on Wednesday banned President Trump’s campaign from tweeting until they delete a tweet about the Coronavirus that the tech company says violates its “rules against misinformation.”

According to Gateway Pundit, the tech giants are working together to silence the President of the United States and his campaign.

The original Tweet from @TeamTrump is in violation of the Twitter Rules on COVID-19 misinformation, and we've required removal. https://t.co/fDPcEa9hRe

And now we know that the Twitter official who was first to announce the suspension of the Trump campaign account.
His name is Nick Pacilio.

The Twitter employee who announced to the world why the @TeamTrump account was briefly suspended is also Kamala Harris’s former press secretary.

Silicon Valley is hopelessly biased against the President and only enforces the rules in one direction.

So a lot of drama with more confirmation of the breadth of the presence of the deep state in Silicon Valley.

As hard as they try, they just can’t find the silver bullet and in the end, the November 3rd election might just come down to how much cheating and voter manipulation, will they be able to get past the observant Trump team, and will it be enough to steal the election?