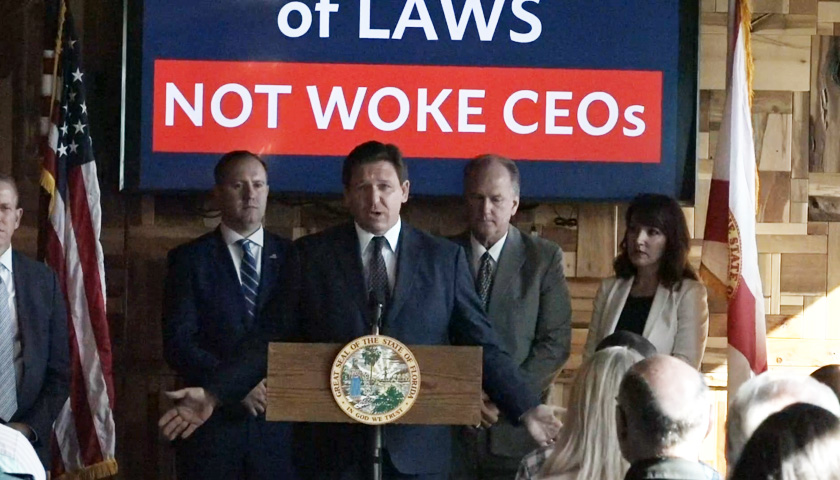 The battle against the usage of a social credit score in the United States is ramping up as more information comes to light.

On Thursday, Florida’s Chief Financial Officer announced his department would pull $2 billion worth of its assets managed by BlackRock Inc (BLK.N), resulting in the largest divestment by a state that is opposed to the asset manager’s environmental, social and corporate governance (ESG) policies.

“Governor Ron DeSantis along with fellow Trustees of the State Board of Administration (SBA) passed a resolution directing the state of Florida’s fund managers to invest state funds in a manner that prioritizes the highest return on investment for Florida’s taxpayers and retirees without considering the ideological agenda of the environmental, social, and corporate governance (ESG) movement.”

In reality, the less than 3 billion dollars pulled by both states collectively is a little more than a drop in the bucket of BlackRock’s $8 trillion in assets. However, it confirms that a growing number of  Republican politicians are engaged, working against ESG investing, which they see as promoting a “woke agenda” is gathering steam.

Forbes describes the criteria for the ESG strategy as:

In a statement, Florida CFO Jimmy Patronis said the state’s Treasury, which he oversees, would remove BlackRock as manager of about $600 million of short-term investments and have its custodian freeze $1.43 billion of long-term securities now with BlackRock, with an eye on reallocating the money to other money managers by the start of 2023.

Patronis accused BlackRock of focusing on ESG rather than higher returns for investors.

“Florida’s Treasury Division is divesting from BlackRock because they have openly stated they’ve got other goals than producing returns,” Patronis said in the statement provided by his office.

A BlackRock representative did not immediately comment but CEO Larry Fink believes stakeholder capitalism is a driving force behind ESG.

A great organization can be characterized by its ability to create value and operate on a clear purpose as well as inspire trust for and engage with its stakeholders, summarized BlackRock CEO Larry Fink in his annual letter to CEOs. Building beneficial relationships between companies and the employees, customers, suppliers, and communities is what defines healthy capitalism.

As we enter into 2022, Fink states that stakeholder capitalism will be a powerful force in propelling the ESG (Environmental, Social, Governance) agenda forward. “It is through effective stakeholder capitalism that capital is efficiently allocated, companies achieve durable profitability, and value is created and sustained over the long term,” states Fink.

“Consistent profitability will remain the market’s measure of success, yet a company’s ability to innovate, adapt to change, and embrace the acceleration of technology will define its ability to prosper in the long run. Stakeholders will drive this transition over the coming years and play a major role in addressing critical concerns like climate change and employee well-being within companies.”

BlackRock publically admits is has encouraged portfolio companies to take steps like disclosing more data about their carbon emissions or adding more diverse board members, it has said its efforts are aimed at improving company performance while denying that they are purposely divesting from fossil fuel energy producers, especially oil companies.