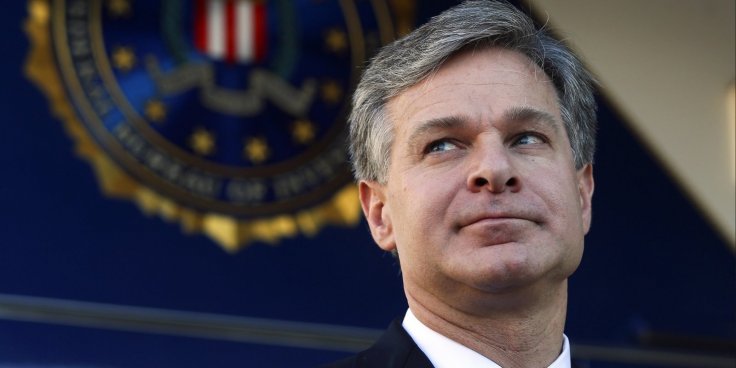 In what many believe was an overly ambitious goal, the MAGA supporters were all on board.

The problem for Americans who demand law and order, Mr. Trump as a DC outsider, did not fully understand the depth and power of the bureaucracy in the intelligence agencies.

Trump replaced the dirty and arrogant James Comey with Christopher Wray who became the eighth Director of the FBI on August 2, 2017, hoping to drain the swamp at the FBI.

But instead of cleaning house, the new director appears to have just taken the baton and continued in the same race as his predecessors.

According to FBI whistleblower, Chris Wray personally removed concerns by rank-and-file members that the agency had become too politicized in deciding which cases to open.

Multiple FBI whistleblowers, including those in senior positions, are sounding the alarm about tampering by senior FBI and Justice Department officials in politically sensitive investigations ranging from the 2020 election and campaign finance probes across multiple election cycles.

The Whistleblowers also allege that Tim Thibault and other FBI officials sought to falsely portray as disinformation evidence acquired from multiple sources that provided the FBI derogatory information related to Hunter Biden’s financial and foreign business activities, even though some of that information had already been or could be verified.

In August of 2020, FBI supervisory intelligence analyst Brian Auten opened an assessment, which was used by a team of agents at FBI headquarters to improperly discredit and falsely claimed that derogatory information about Biden’s activities was disinformation, causing investigative activity and sourcing to be shut down.

Rep. Jim Jordan (R-OH), the top Republican on the House Judiciary Committee, has also been fielding whistleblower allegations against officials at the Justice Department and FBI since last November.

Jordan said Sunday to Fox News’s Trey Gowdy that 14 whistleblowers from within the FBI had come forward to his office:

Fourteen FBI agents have come to our office as whistleblowers, and they are good people. There are lots of good people in the FBI. It’s the top that’s the problem. But some of these good agents are coming to us telling us this is bologna what’s going on, the political nature now of the Justice Department.

“BREAKING: FBI Director Christopher Wray allegedly removed concerns raised by rank-and-file agents from this year’s final report by the FBI’s Special Agents Advisory Committee (SAAC) about FBI leadership becoming “too politicized” in deciding which cases to open and which investigations to pursue, FBI whistleblowers have told the Senate Judiciary Committee.”

“The SAAC Executive Council, representing more than 10,000 agents from the bureau’s field offices, holds its meetings with the director at FBI headquarters twice a year.” 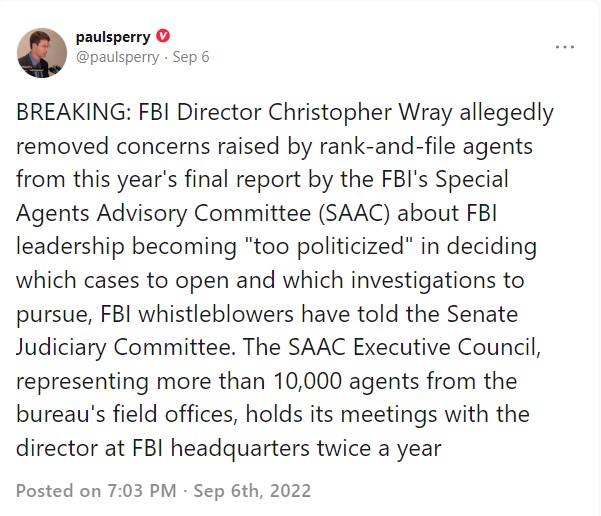 “For 6 years, the FBI has been falsifying evidence or suppressing exculpatory evidence to frame Trump targets; destroying evidence that would incriminate the bureau; lying to both the IG and Congress; spying based on fraudulent warrants; opening investigations based on false pretenses; criminally leaking classified intercepts to the media; spreading false propaganda; and conducting corrupt searches and seizures.”

“Yet no one is in jail for any of it. Not even dirty FBI lawyer Clinesmith, who confessed to forging a wiretap document.” 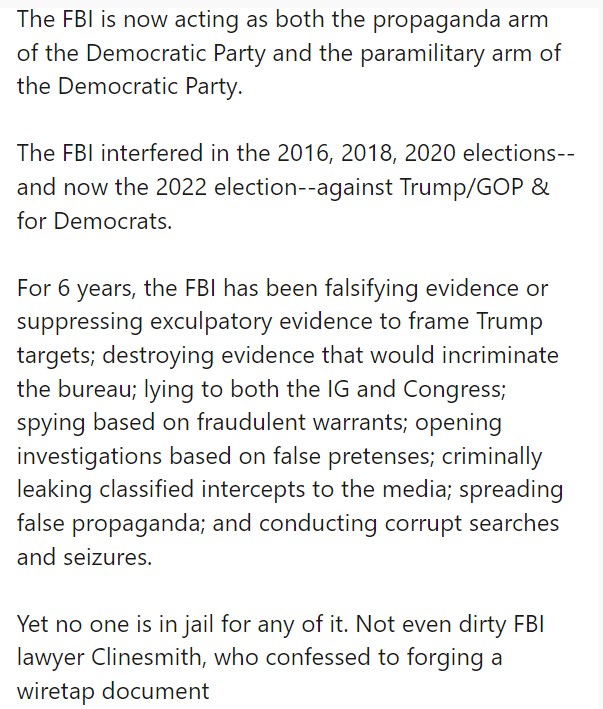 When the leadership in the intelligence agencies and DOJ are corrupt, it is nearly impossible for anyone putting America first to guide the ship into proper waters.

It’s like asking the fox in the hen house, to take care of the hens, and turn over all the eggs to the family, but who instead kills the hens not wanted, and distributes the eggs to select members only.

This is why there have not been any arrests of high-ranking government officials, only a constant attack on those who want to remove the hen and guide the US into a more, just, future.

If Trump is elected to a second term, he must remove all the foxes, and work to deconstruct the federal government.