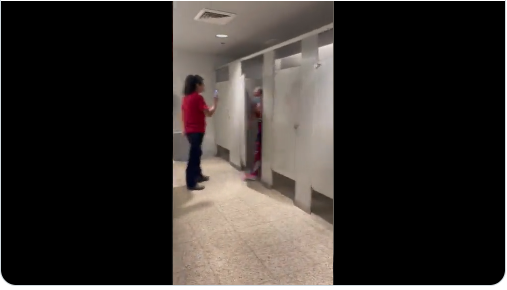 What used to be rare has become the norm.

With the invention of the Internet, and especially free live streaming on platforms like Facebook & TikTok, women are now quick to confront strangers as SJW activists and to get views.

Unlike previous BLM & ANTIFA burn-down sessions in Portland and Minneapolis, a few small groups of mini-fascists stalked and confronted the only two U.S. Democratic Senators who care about our national debt and ending excessive pork-barrel spending.

Sen. Kyrsten Sinema was confronted by immigration activists who followed the senator from the classroom where she teaches at Arizona State University to the bathroom while demanding the Arizona Democrat take action on a “pathway to citizenship.”

The video comes on the same day another group of activists confronted Sen. Joe Manchin at his houseboat in Washington, D.C., demanding the West Virginia Democrat drop his opposition to his party’s $3.5 trillion spending bill.

11/ Thank you to @Sen_JoeManchin for specifically offering an in-person meeting on Capitol Hill today or Monday for the West Virginians of @Race_Matters_WV @_youngwv @RiseUpWV and more!

They’re looking forward to it and extending stays to ensure they’ll be in DC on Monday! pic.twitter.com/jVS8n1zkpW

Both Sinema and Manchin have expressed opposition to the legislation, dealing a blow to Democrats who cannot afford a single defection in the evenly split Senate.

“We knocked on doors for you to get you elected. Just how we got you elected, we can get you out of office if you don’t support what you promised us,” one of the activists said to Sinema in the video that was recorded with a phone.

The activists first confronted Sinema at her ASU classroom, then followed her down the hall as the senator went into the bathroom and shut the door of a stall. Not dissuaded, the activists continued voicing their demands from inside the bathroom.

🔴BREAKING: Blanca, an AZ immigrant youth confronts @SenatorSinema inside her classroom, where she teaches @ ASU. "in 2010 both my grandparents got deported bc of SB1070…my grandfather passed away 2 wks ago & I wasn't able to go to Mexico bc there is no pathway to citizenship." pic.twitter.com/JDZYY2fOD2

TRENDING: MyPillow Up To 66% Off – Promo Code FTR

Sinema did not address their concerns, wanting to get away from them, but instead ignored the group as she exited the stall and washed her hands.

We wouldn't have to resort to confronting @senatorsinema around Phx if she took meetings with the communities that elected her. She's been completely inaccessible. We're sick of the political games, stop playing with our lives.
“Build back better, back the bill!" pic.twitter.com/3OA5t6e6Fl

I am all for citizens reaching out to their public officials to discuss legislation, but following them in and out of a bathroom is harassment, and in the wrong circumstances could go terribly wrong.

Once our political and legal systems stopped enforcing immigration laws, people in these types of videos wrongly feel like they are on the high moral ground, when in effect they have violated our nation’s laws and should be prosecuted.

Thanks Biden! More Inflation and Shortages – Backlogged Cargo Ships Off Both Coasts Face 4-Week Wait
$10 Per Gallon? Biden’s Policies Has Caused Oil Pricing To Its Highest Level Since 2014