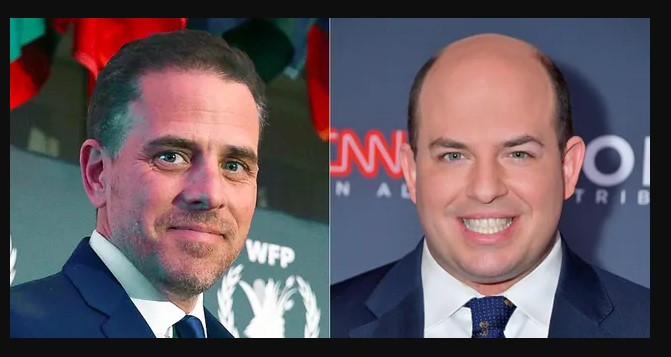 In some of the emails and audio files found on the abandoned computer candidate and now President Joe Biden was mentioned.

In a few of them, Hunter and his business partners implied that Joe had set up the business deals with foreign leaders, for Hunter, and that he was to be compensated in the back end as “The Big Guy”.

After 18 months in office, Joe’s presidency is struggling in all polling.

This has led to increasing doubts about the president. As a result, far-left media seems to be reversing course and is openly discussing the possibility that Hunter could cause his father problems if he seeks re-election in 2024.

CNN’s Brian Stelter acknowledged that the ongoing federal investigation of the president’s son is “not just a right-wing media story” during an interview with a former Biden political aide Sunday morning on “Reliable Sources.”

Stelter said, “Maureen Dowd’s column in this morning’s New York Times basically says that Joe Biden should not run for re-election. This has been a narrative for months, and it is getting louder and louder, including from some Democratic lawmakers saying Biden should basically hang it up and say he is a lame duck and not run in 2024. So where do you come down on this as a former White House aide?”

Former press secretary for First Lady Jill Biden, Michael LaRosa, said, “I hope he runs. I know he’s going to run. He’s planning to run, as he said many times.”

LaRosa said, “I don’t see why he wouldn’t run. I haven’t heard a reason why.”

Stelter said, “What about his son, what about Hunter? Hunter under federal investigation, charges could be coming at any time. This is not just a right-wing media story. This is a real problem for the Bidens. Could he decide not to run for re-election, given his son?”

LaRosa said, “Look, they make decisions as a family, and they will make that decision when it’s time.”

Stelter asked, “Do you think they’ve talked about it yet?”

LaRosa said, “No. The president is doing his job, and he’s doing his work. He’s not focused on that. It’s 19 months! Why would he do that?”

We are still over a year away from Joe having to make his announcement formally.

What is going to happen is anyone’s guess at this point.

Woke FL School Board Member Brags” ‘Woke’, We’re ‘Working from the Inside’
Depression Coming: “Things Are Going to Get Worse, The Descent is Intensifying”