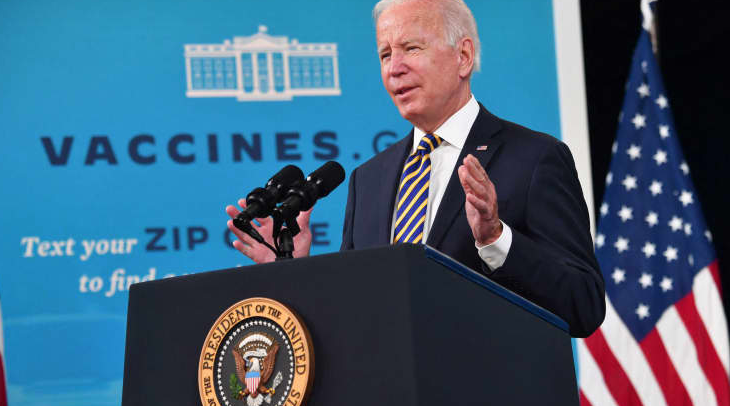 One of the most disturbing characteristics of those in leadership is their manipulation of data and press releases to accomplish their objectives, regardless of the truth.

The left’s election cycle playbook includes calling Republicans racist, attacking wealthy citizens, and since 2020 attacking anyone who will not comply with their COVID “mandates”.

Daily millions of dollars of pro-vaccine advertisements play around the U.S., celebrities do public service announcements shaming the non-vaccinated,  while at the same same time violating the rules they are pushing for.

President Biden is pushing for an unconstitutional COVID vaccine mandate to be enforced by OSHA. The Occupational Safety and Health Administration delivered its final rule to the OMB on Oct. 12, and the mandate is expected to take effect soon after the agency completes its review.

Joe Biden spoke to a crowd of about 1,500 to 2,500 Tuesday night at a rally for Virginia Democrat candidate for governor Terry McAuliffe held in Arlington, across the Potomac River from Washington, D.C. After he spoke, Biden bounded down the stairs in front of the stage and started working the crowd. Biden, who was not wearing a mask, leaned over to get close to a maskless woman supporter as she spoke to him. As Biden pulled back spit flew from his mouth as he said something in reply to her.

The  U.S. Food and Drug Administration’s (FDA) is rapidly approved vaccines for young and younger Americans even though they have an almost zero chance of dying from COVID.

Business groups are worried that President Joe Biden’s Covid vaccine mandate for private companies could cause a mass exodus of employees, business groups are pleading with the White House to delay the rule until after the holiday season.

Thirty percent of unvaccinated workers said they would leave their jobs rather than comply with a vaccine or testing mandate, KFF poll published last month. Goldman Sachs, in an analysis published in September, said the mandate could hurt the already tight labor market.

White House officials at the Office of Management and Budget held dozens of meetings with labor unions, industry lobbyists and private individuals last week as the administration conducts its final review of the mandate, which will require businesses with 100 or more employees to ensure they are vaccinated against Covid or tested weekly for the virus. It is estimated to cover roughly two-thirds of the private sector workforce.

OMB officials have several meetings lined up Monday and Tuesday with groups representing dentists, trucking companies, staffing companies and realtors, among others.

The American Trucking Associations, which will meet with the OMB on Tuesday, warned the administration last week that many drivers will likely quit rather than get vaccinated, further disrupting the national supply chain at time when the industry is already short 80,000 drivers. They estimate companies covered by the mandate could lose 37% of drivers through retirements, resignations, and workers switching to smaller companies not covered by the requirements.

“Now placing vaccination mandates on employers, which in turn force employees to be vaccinated, will create a workforce crisis for our industry and the communities, families and businesses we serve,” Chris Spear, the association’s president and CEO, wrote in a letter to the OMB last Thursday.

Retailers are also particularly concerned the mandate could trigger a spike in resignations that would exacerbate staffing problems at businesses already short on people, said Evan Armstrong, a lobbyist at the Retail Industry Leaders Association. “It has been a hectic holiday season already, as you know, with supply chain struggles,” Armstrong told CNBC after a meeting with White House officials last Monday. “This is a difficult policy to implement. It would be even more difficult during the holiday season.”

The National Retail Federation, the trucking association and the retail leaders group are asking White House officials to give businesses 90 days to comply with the mandate, delaying implementation until late January at the earliest.

The fact that leftists from the White House to local businesses are willing to consider delaying vaccines mandates in order to help the economy, confirms the COVID situation is not a medical emergency after all.

It’s time to get back to life, liberty, and the pursuit of happiness.