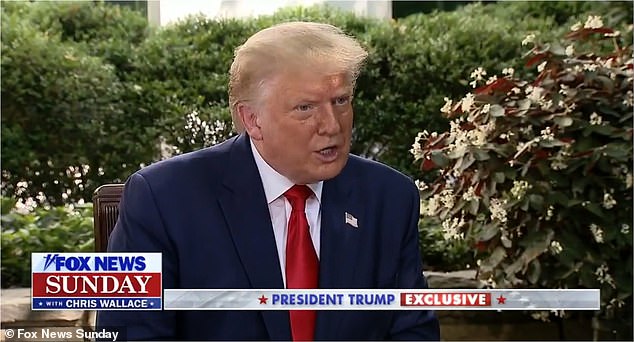 Who is Mary Trump and why does it matter? Let me give you a few hints, her name ends with Trump and she is a progressive, lesbian and anti-American know it all.

Just 4 months out from the re-election of President Trump, the democratic establishment just rolled out their next “dramatic” exclusive, interview from a new “tell-all” book. This time their liberal foot soldier, and granddaughter of Fred Trump, Mary Trump.

In her book, she attempts to describe Fred as an angry, emotionless, dictator who used everyone, including his children, for his business activities. Mary’s father and oldest son to Fred, Fred Trump Jr., was not of Trump’s ruthless cloth, so he lost his father’s affection over time.  Then turning on her Uncle, she claims he did not have a lot of friends and was sent off to military prep school.  After graduating, and learning how to earn his father’s approval, he adopted his father’s work ethic which created the dangerous man, and her Uncle, serving as our 45th President, Donald J Trump. 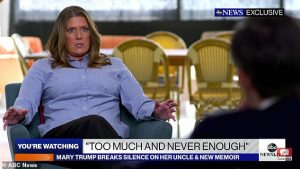 As expected President Trump. after watching the ABC News interview with Mary Trump came out in defense of his father, family, and himself.

Donald Trump has hit out at niece Mary again, this time calling her tell-all book about their family ‘stupid and vicious’.

The president told Fox News Sunday host Chris Wallace that she was not a ‘family favorite’ and that he and his loved ones ‘didn’t have a lot of respect or like for her’.

His scathing attack comes after the release of Too Much and Never Enough: How My Family Created the World’s Most Dangerous Man in which Mary Trump, a trained psychologist, said the president suffered ‘child abuse’ at the hands of his father’.

Mary Trump says ‘love meant nothing’ to Fred Trump Sr and he only wanted obedience, which the President was forced to give him.

Donald’s mother became ill when he was two years old, leaving him with ‘total dependence on a caregiver (Fred Sr) who also caused him terror,’ Mary writes.

But on Sunday Trump hit back, saying: ‘My father liked to win. My father was a very good man. He was a strong man.’

Rounding in on Mary, who is the daughter of his eldest brother Fred Trump, who died in 1981 due to complications from alcoholism, he added: ‘I would’ve never said that except she writes a book that’s so stupid and so vicious and it’s a lie.

Admitting that it ‘hurts’ for his family to be ‘attacked’, he said: ‘My father was a great, wonderful man.

‘It hurts me more about attacking my father, not being kind to my mother. I have a mother who was like a saint. She was incredible. She was an incredible woman and she [Mary Trump] was nasty even to my mother. ‘She’s [Mary] a very scarred person. She was not much of a family person.’

After admitting his dad was ‘tough on all the kids’ he said his niece was ‘not a person that I spent very much time with’ adding that he is now ‘glad’ of that fact.

He added: ‘For her to say – I think the word she used was a psychopath – what a disgrace. She ought to be ashamed of herself. That book is a lie.’

Mary’s Trump came off lifeless, untrustworthy, and not comfortable trying to explain her thoughts. At one point, the interviewer, George Stephanopoulos, asked her to complete an important line in the book, which she could not. Something to the effect she could not let this man destroy our country.

The entire goal of her book was to prove Donald J Trump is too dangerous to be the President, as a psychopath. As we all know, he has shown for three and a half years he is quite capable and has done the job effectively. In the end, nothing burger, just some temporary good ratings for ABC and new outlets.