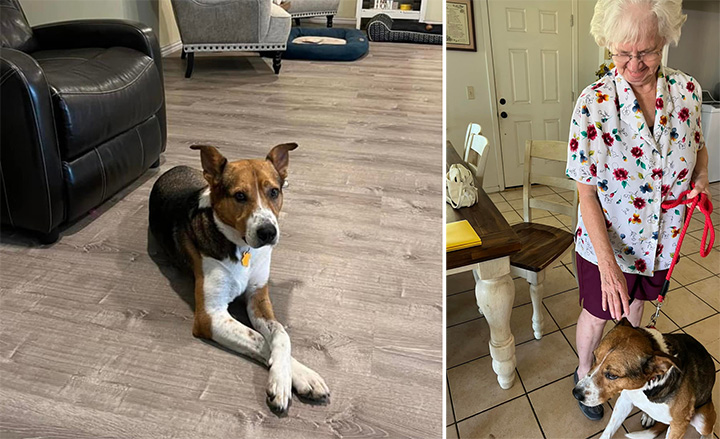 A dog that survived 7 years on the streets in Austin is being called a hero by his proud, new owner.

Last year, Mary Cormier got a call about a dog with a broken leg on the side of the road. The dog, Ranger, was hit by a car while roaming around like he was used to. Cormier said Ranger had been homeless for seven years and was in desperate need of a better life.

“He made it through every winter, every blistering Texas heat for seven years,” Cormier told KBTX 3.

She took him in and got him the surgery he needed with the help of donations. While Ranger was at Cormier’s home, she taught him how to take treats from her hand and interact with other dogs.

“Some dogs are just good,” Cormier said. “There’s nothing negative I could say about him. This is a good dog.”

He enjoyed spending most of his time inside.

“Ranger was meant for better,” she said. “He’s served his time. I felt like he needed to be an indoor dog.”

Cormier has rescued several dogs and has an application for those who show interest in the dogs she has at the time. She received several applications from families wanting to make him an outside dog. She turned those down but then she came across an application from Judy Okert. It was a perfect match.

“The house is so empty without my dog… a dog, and this is now my dog, no doubt,” Okert said. “He’s such a sweetheart. He’s handsome too.”

Ranger has now lived with Okert for almost two weeks. She said he has been a companion and a protector.

He’s also been a hero.

Ranger recently alerted Okert when her granddaughter was having a seizure. He scratched on the granddaughter’s door, whimpered loudly and ran to Okert.

“I don’t know what we would’ve done without him,” Okert said.

My family has rescued dogs over the years.

They appear to quickly fit in, so happy to be safe and loved as last.

Not Welcome! Alabama Sororities Unanimously Reject Membership For Transgender Applicant
Elon Musk: “Being a Mom is Just as Important as Any Career”