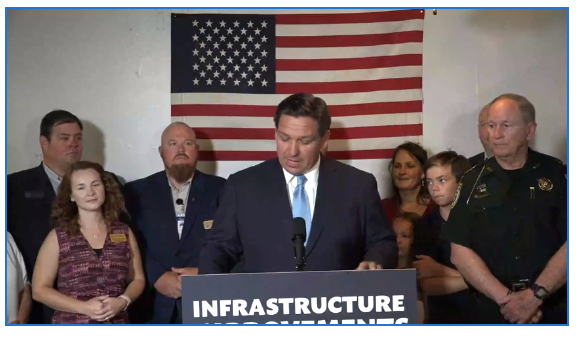 Once again Governor DeSantis is taking a stand against the federal government.

On Monday, the popular first-term Republican defended his administration’s decision to advise against coronavirus shots for young children.

“The White House is lying about it,” DeSantis said during a press conference in Nassau County after being asked about the White House apparently asserting that Florida had “reversed” its decision on child vaccines.

“Yes, we recommend against it. We are not going to have any programs where we’re trying to jab six-month-old babies with mRNA. That’s just the reality.”

“And I think what happened was they thought somehow we would likely be embarrassed by that. No, we’re following the data,” he said, adding that “we still have not ordered it, we’re not gonna order it.”

“Now what they’re saying is because practitioners and hospitals can order it somehow we’ve reversed,”

“I said from the beginning they’ll be able to do that. We don’t have the authority to prevent it. And quite frankly, if someone wants to make a different decision, I would just caution people to look at the actual data in the clinical trial. It is the weakest possible data that you could possibly see a very small number of people. What the recommendation is from them doesn’t even track the outcomes,” he said, adding that people can “ask their pediatricians, they can ask their doctors what’s the evidence of protection against severe disease.”

“There was none in the clinical trial. … but for us … there is no proven benefit to … a baby with an mRNA,” he said. “So that’s why our recommendation is against it.”

“That’s different than prohibiting the use in Florida, which we don’t have the authority to do,” he added. “And quite frankly, you know, we’re confident people can make their own judgments.”

Last week, DeSantis made it clear that the state recommends against vaccines for children as young as 6 months old but emphasized they were not banned in the state.

“Our Department of Health has been very clear the risks outweigh the benefits. And we recommend against it — that’s not the same as banning it,” he stated.

DeSantis said it is crucial to “ask questions” — not just blindly accept the federal government’s recommendation:

They are recommending giving the mRNA shot to people, young babies and kids that have already recovered from COVID.

They don’t have any clinical data on that. And people have looked at some of the stuff and have recognized how that–  and you know what the White House is bragging that we’re the only country that is trying to do mRNA shots for infants.

And I’m just thinking to myself, well, wait a minute. There’s nothing wrong with being the lone ranger if you’re right. But the other countries in Europe that are going to different directions similar to the direction Florida’s gone, they have been right on COVID way more than Fauci and his crew have been throughout this whole thing.

“And so this is an example where they are pushing this with very, very, very scant data,” he said. “But again, people can make their judgments — but ask questions.”

“And the fact of the matter is, I think what this whole year and a half has shown us is these regulatory agencies in the federal government have basically become subsidiaries of the pharmaceutical companies,” he continued

“They are not independent regulators. They basically are there to rubber-stamp what Pfizer wants to do,” DeSantis added.

Can you imagine what the United States looked like if we had a Ron DeSantis in every governor’s mansion in the USA?

This is my hope and why I write political articles and record podcasts proving information on what the left is trying to do, and how We The People can stop them.