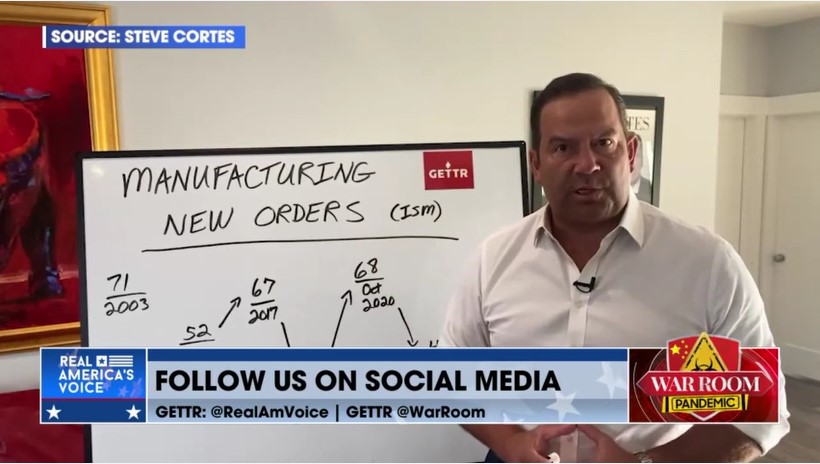 During the 2020 election cycle, multiple financial analysts warned about the proposed policies the Marxist (Democratic) candidate Joe Biden was promising he would try to implement if elected.

Unfortunately, after only 18 months, their concerns are coming to pass.

One of them, Steve Cortes, a former advisor to the Trump Campaign, is sharing that things in the economy are heading in the wrong direction, even towards a depression.

“This is manufacturing new orders.  This is by definition forward-looking, an extremely important data set.  It just hit 49 and 48, meaning a below 50 contraction.  That is a recession.”

“Let’s put this number in context, [the] all-time high is 71, back in 2003.  Trump was elected with this number at 52.  His economic program and the Trump boom brought it all the way to 67.  Then it tanked into the lockdowns of 2020, not surprisingly.  But then what happened after that?”

“It months later soared to another new record, the highest it had seen since 2003, a great handoff to Joe Biden…What did he do with this inheritance, he squandered it.”

The good news is, that the U.S. House should flip back to Republican control in November creating a road black to Biden’s radical agenda.