“Danger Will Robinson” – Biden And Kamala Are Coming After Our Guns | She Even Laughed About It!

Just like former President Barak Hussein Obama, Senator and now VP Democratic nominee Kamala Harris, both believe the Constitution is a hurdle, not a wall like most Americans.

Yes, our founding fathers wrote the Constitution, limiting the size and scope of the federal government, and yes they went on to write the Bill Of Rights, including the 2nd amendment, “A well regulated Militia, being necessary to the security of a free State, the right of the people to keep and bear Arms, shall not be infringed”. 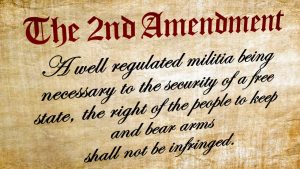 Yet because of the world view that the Constitution is a “living” document, thus must be interpreted within current 20th-century cultural norms, there are those in politics and universities, who believe anti-gun right laws are Constitutional.

Barak Obama and Kamala Harris believe gun rights must be infringed upon, Joe Biden, until recently, believed the Constitution stands in the way of liberal gun legislation, Kamala laughed.

FLASHBACK: Kamala Harris laughs when Joe Biden brings up the fact that the Constitution would prevent the President from taking Executive Action to confiscate guns.

I wonder how they both feel about this issue now. pic.twitter.com/33NjAnL5Ic

“I mean I would just say ‘Hey Joe, instead of saying ‘no, we can’t’, let’s say ‘yes, we can’,’” cackled Harris in response to the softball question.

How radical is Kamala, and what would she push for in the event Joe Biden is elected President on November 3rd but has to step down, elevating her to Commander In Chief?

On the campaign trail and in debates, Harris said she would demand Congress to send her a bill to tighten gun regulations in her first 100 days, or she would take executive action. Specifically, she has advocated for:

Even though Biden seems to understand the Second Amendment, he doesn’t appear to have much knowledge of guns themselves. Back in March while on the campaign trail, Biden had a heated exchange with a Detroit autoworker over gun rights.

The voter accused Biden of wanting to confiscate guns. Biden fired back saying the man was “full of sh*t” and that no one was going to take away his “AR-14.”  The blunder was another comical viral moment to add to the ever-growing list of Biden gaffes.

This is not a laughing matter, our Constitution is the law of the land, and anyone who is narcissistic enough to try to supersede it with Executive Orders, like Obama’s DACA fiasco, has no right to be Vice President and definitely not the President Of Our United States Of America.

Everyone votes Conservative on November 3rd, everyone!