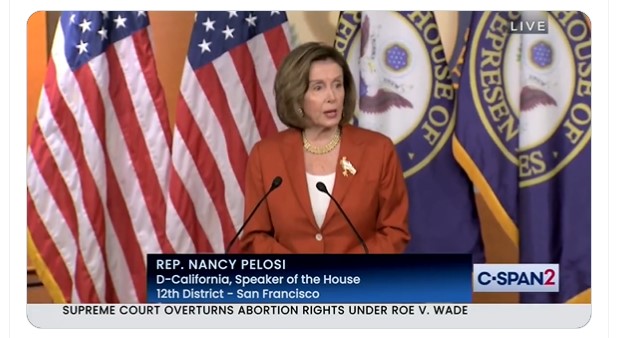 House Speaker Nancy Pelosi once again shamelessly undermined the Judicial Branch of our government, labeling the Supreme Court as an “extremist” body that punishes the people.

The Democrats had a 5-plus week notice that Roe vs Wade was most likely going to be overturned.

Instead of reaching out to their constituents and encouraging them to accept the Supreme Court decision for the sake of our Constitutional Republic, the radical left is beating their various war drums, and gaslighting their waiting woke mobs on social media, and news networks, 24 hours a day.

In addition, they are targeting the  5 conservative justices who ended up supporting ending Roe.

The final decision resembles the leaked May document from January’s vote following arguments on the Dobbs case.

“While this extremist Supreme Court works to punish and control the American people, Democrats must continue our fight to expand freedom in America,” Pelosi said in a letter to Democrat colleagues

JUST IN – Pelosi, the speaker of the US House, labels the Supreme Court an "extremist" body that punishes the American people. pic.twitter.com/ewLhR5AnN8

Pelosi spoke about the ruling at a press conference.

During it, she acted more like a disgruntled juvenile, instead of the 3rd most powerful politician in the U.S. Government; “There’s no point in saying good morning,” and without a trace of irony called the ruling “deadly serious.”

"There's no point in saying good morning because it certainly is not one." pic.twitter.com/aBpnvnMqTL

“Today, the Republican-controlled Supreme Court has achieved the GOP’s dark and extreme goal of ripping away women’s right to make their own reproductive health decisions.”

“Because of Donald Trump, Mitch McConnell, the Republican Party, and their supermajority on the Supreme Court, American women today have less freedom than their mothers,” Pelosi said.

“With Roe now out of their way, radical Republicans are charging ahead with their crusade to criminalize health freedom.”

“In the Congress, Republicans are plotting a nationwide abortion ban. In the states, Republicans want to arrest doctors for offering reproductive care and women for terminating a pregnancy,” Pelosi added.

GOP extremists are even threatening to criminalize contraception, as well as in-vitro fertilization and post-miscarriage care.” she finished.

Pelosi also attacked the legitimacy of the Supreme Court, “Pelosi on the court: “No, I don’t respect a process that criminalizes a women’s right to her reproductive freedom.”

In addition to Pelosi’s rants, US House Member Alexandria Ocasio-Cortez (D-NY) earlier today released her list of Seven Ways Democrats can fight back against Roe being overturned.

We can do it!
We can at least TRY

The war rages on, and We The People must stage engaged, though and though.