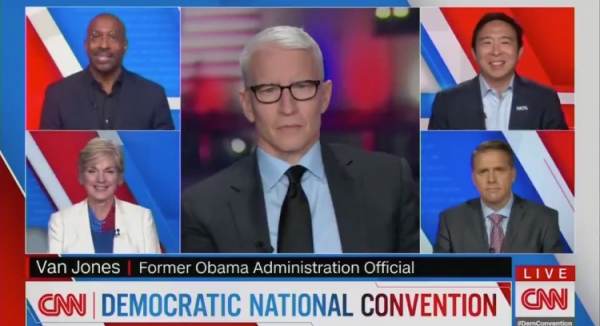 Communist Van Jones : ‘As Long as Biden Didn’t Embarrass Himself, We Were Going to Come Out and Praise Him!’ (VIDEO)

Some people just don’t know when to “toe the line”.

The Communist political commentator is one of them, much to the chagrin of the CNN staff and management.

Jones and the other panelist were jumping for joy as Anderson Copper lead them in their collective sigh of relief, then each recited the pre-written talking points if Joe survived.

In his zeal of Joe not totally blowing it, Jones admitted the Democrat-media complex had set the bar really low for Biden’s acceptance speech.

“And we were prepared for it to be a terrible speech. As long as he didn’t embarrass himself, we were going to come out here and praise it!”

All it took for the left to be happy was for Joe to do a few things requested by the focus groups.

Well, an angry Joe Biden slammed his hands on the lectern then ripped into President Trump during his Dem convention speech.

Without explaining his policies, or actual steps he would take to implement them, the holding on for life Presidential candidate did his best to stay on teleprompter message.

Sadly, by Biden simply showing up without making any monumental gaffes, while reading from a teleprompter, he got a perfect 10 score from the Democratic faithful.

With this major hurdle over with, a Biden campaign aide told CNN reporter MJ Lee that Basement Joe may never appear at a rally this fall.

The larger question is, will Joe show up for the debates?

We know the left will provide cover for him if he doesn’t.

Then Americans will have to decide if they can vote for someone who was not able to debate the man he thinks should be replaced.

If this happens, and Biden wins, the Marxist indoctrination has worked. The parents who dropped their children of at the public schools, and did not monitor what they were getting taught, will be to blame.  Wake up America, Hilter brainwashed the youth, and the left has done the same in our generation.

Hopefully, it is not too late to stop the mentally unstable establishment from executing their plans for tyranny.