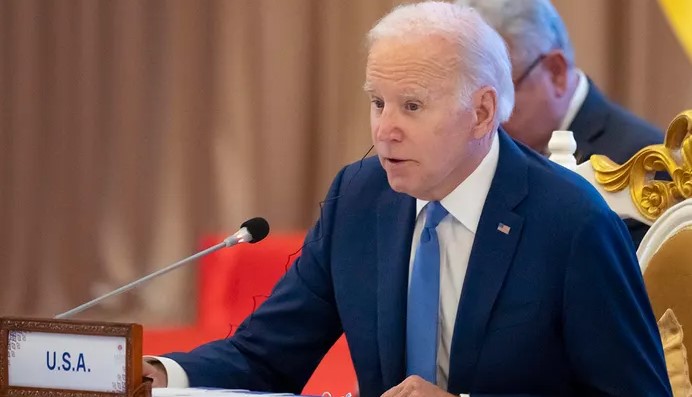 Once again President Joe Biden showed the world that he is mentally holding on by a string, just trying to get through public events with too many gaffes.

During the Association of Southeast Asian Nations summit, Biden has twice referred to host Cambodia, as Colombia, including Saturday during remarks opening the talks.

“It was an honor to host at the White House in May, and now that we are back together in Cambodia,” Biden said as he opened the talks. “I look forward to building even stronger progress than we’ve already made. I want to thank the prime minister for Colombia’s leadership as ASEAN chair.”

This lack of cognitive processing was similar to the comments he made just before departing for the meeting.

The almost 80-year-old Obama puppet told the press he was “heading over to Colombia” before correcting himself.

But once again Biden did not mention the People’s Republic of China by name, he instead focus on the need for “cooperation” and adherence to international law.

“Together we will tackle the biggest issues of our time, from climate to health security to defend against significant threats to the rules-based order and to threats against the rule of law,” the president remarked.

“We’ll build an Indo-Pacific that is free and open, stable and prosperous, resilient and secure,” Biden added.

This assurance by the administration that the United States will fund and use its influence to ensure fair trade internationally followed Friday’s announcement, in Egypt, at the United Nations COP 27 climate conference, that Biden is also launching a multimillion-dollar “Climate Gender Equity Fund” to address purported “inequalities women face in climate finance”.

It's being funded by USAID and Amazon. pic.twitter.com/3WGnwzMuum

With the GOP failing to take control of the US Senate and only taking control of the US House by a few seats in Tuesday’s midterm elections, Biden will have the green light to continue spending hundreds of billions of dollars overseas, not at home, in the name of global equity, The Great Reset.

INVASION! Border Numbers Worsened In October, Historic Number of ‘Known Gotaways’
The ‘Squad’ Called Out For No Solutions: ‘Call Them What They Are — Stupid Radicals’