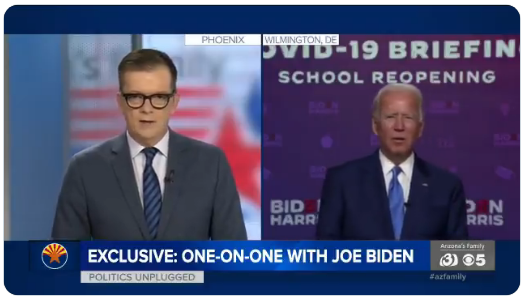 Another day and more video proof that former Vice-President Joe Biden, is handing on by his chinny chin chin.

With Biden’s poll number falling like a rock, Joe has to forced out of his basement and is slowly getting in front of more people.

The problem is when he does, everyone on the left is holding their collective breath, hoping for no brain freezes or misspeaks, and the thinking part of our culture simply waits for the inevitable. Incoherent sentences, lack of continuity in his message, and basic statements so rehearsed they are flat and lifeless.

It also appears his interviews are limited, to around 20 minutes, and as we saw last week, the questions are scripted so Joe’s brain can be triggered to answer them.

A woman at Biden event in Kenosha, WI says she was given a “paper” telling her what to say. “I’m just going to be honest, Mr. Biden. I was told to go off this paper, but I can’t.”

This sounds reasonable, right? Well, a few weeks ago Joe had a different opinion on the legality of the federal government forcing Americans to wear masks.

BREAKING: Joe Biden and Kamala Harris call for a “nationwide face mask mandate” without explaining the specifics of how that would work. pic.twitter.com/KtXT2PxCkC

Biden delivered his remarks after a Covid-19 roundtable in mid-August – “Let’s institute a mask mandate nationwide, starting immediately and we will save lives,” said Biden. “The estimate is that we will save over 40,000 lives in the next 3 months if that is done.”

TRENDING: Black Georgia Man Who Stabbed Stranger Because He ‘Felt the Need to Find a White Male to Kill,’ Murders His White Cell Mate Following His Arrest

With this in mind, now listen as Dennis Welch asks Biden about his calls for an unconstitutional nationwide mask mandate. Joe as a man of conviction, who knows what he believes, who just told the CV-19 conference he would implement a mandatory mask edict nationwide, now had a chance to share his wisdom with voters in Phoenix.

Nope, this time Biden conceded it is ‘probably unconstitutional’ but the reporter gave him a pass and didn’t press him on his flip-flopping.

Biden now says a national mask mandate is probably unconstitutional and he wouldn’t do it.

This is a full 180-degree reversal. pic.twitter.com/cSxo6Q5LCD

Since interviewers are only given a short period of time to ask Biden questions, Dennis notices he has to close out the interview and asks a snowball, easy question, for Joe’s supporters in AZ. When will you be coming out to visit Arizona?

As usual, Joe rambled for a few minutes, saying nothing. He did not provide any information or even show a desire to visit Arizona. The reality is, Joe will not be visiting most states, he is too weak physically and will get himself in trouble the more he gets around mixed crowds of supporters and detractors.

“I’m gonna come and visit ya. I promise you based particularly on the fact that the welcome seems to be pretty strong based on the polling data,” Biden said (awkward) before catching himself and claiming it was just a joke.

“I’m not going to do what the president does. I’m gonna show up and set an example and make sure that I am setting the example of the way in which we should deal with this Coronavirus…social distancing and the like…I’m gonna listen to the scientists.”

Come on America – just say no to Joe!