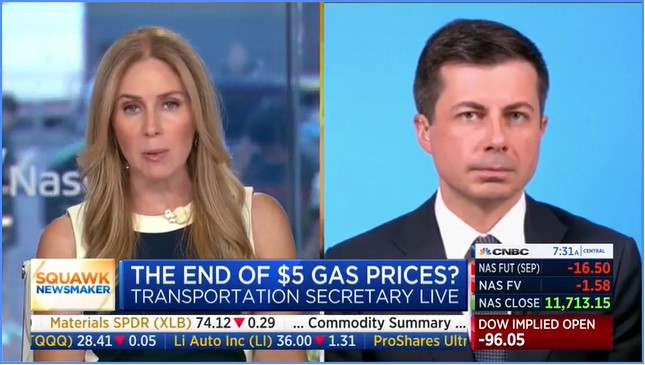 Hey America, are you ready to buy a 60K electric car this year?

I guess the answer is no, causing the administration to scratch their collective head.

Transportation Secretary Pete Buttigieg on Wednesday said he was “still astonished” that some people “seem to really struggle to let go of the status quo” when it comes to the push for greener energy.

Buttigieg, who the day before touted that high gas prices were forcing Americans towards electric vehicles, acknowledged in a CNBC “Squawk Box” interview that there were “challenges” to transitioning to cleaner energy but emphasized it was important to make the transition.

Pete Buttigieg says he's "astonished" that "some folks seem to really struggle to let go" of their gas-powered vehicles in favor of electric vehicles pic.twitter.com/BPKzV9v3eP

“We should be focused on domestic, clean energy production as leading the way in the U.S. energy mix the less we are confronted with some of the most confounding questions of geopolitical risks that come with the 20th-century economy.”

“I’m still astonished that some folks, and I felt this, as I was testifying in Congress yesterday. some folks seem to really struggle to let go of the status quo.”

“If someone wants to raise the reasons why it’s hard, those are absolutely challenges we should be taking on and working through, but if it’s done as an excuse to do nothing, all we’re doing is signing up for more of these vexing questions that pit our alliances and values against each other, year after year after year.

I don’t want that to be dominating our public discussions in the middle of this century the way it is at the beginning of the century.”

In other words, regardless of the actual net effect on the environment, the left is pushing Americans to fall in line with what they deem to be finished science, “climate change”.