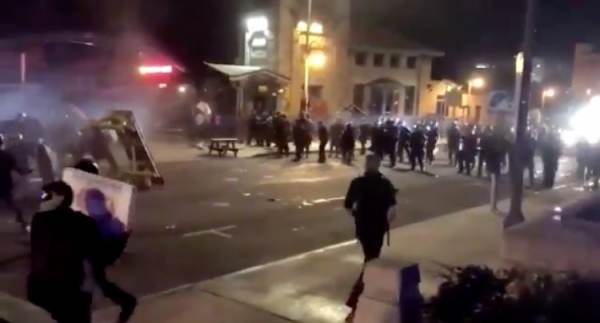 What is happening in Rochester, NY, should make it crystal clear, that the ANTIFA and BLM anarchists rioting in their streets, don’t care about black lives, they are determined to burn down our country using any death of a black American in police custody, to justify their evil actions.

If someone has lost their mental faculties, sitting in the street naked, has to be subdued by the police, and dies due to underlying health issues, how can anyone conclude racism was involved in his demise?

Ask yourself as you go through this article, what would I have done differently?

In the video, which was first reported by the Rochester Democrat and Chronicle, officers approach Prude, who is naked, and Prude initially complies with the officers’ orders. Prude is subsequently seen shouting and spitting, which prompts officers to place a spit bag over his head.

The officers are seen pinning Prude to the ground while the bag is still on his head, and he eventually goes lifeless. Prude died in the hospital a week later.

So let’s recap, the police are called out to a disturbance, a naked mentally ill man is in the middle of the street. The officers don’t know if he had CV-19 or any disease, and as they try to get him detained, he starts spitting towards them, so they put a spit bad over his head while arresting him. He passes out and dies a week later.

Without knowing the facts, a crowd mysteriously forms, and chaos ensues.

The rioters climbed on people’s homes in the middle of the night.

The children of the naked man that died in police custody, hired an attorney.

“Clearly, the conduct of the officers in Mr. Prude’s case was inhumane, and the subsequent cover-up was unacceptable,” he said in a statement. “We look forward to securing justice for Mr. Prude and having Rochester leaders do the hard work needed to address issues of systemic racism and training protocols in the police department.”

In light of this situation, the Rochester police chief and the entire department command staff suddenly announced they are retiring from the force on Tuesday. The announcement comes after several days of riots and violence in response to bodycam footage showing a March incident involving Rochester police and a 41-year-old black man.

After days of protests against the Rochester Police Department in light of the death of Daniel Prude, its top officer and command staff announced Tuesday they are retiring from the force.

Rochester Police Chief La’Ron Singletary said in a statement that he was honored to serve the city in upstate New York for 20 years and commended his staff. However, he said the protests and criticism of his handling of the investigation into the March 23 incident “are an attempt to destroy my character and integrity.”

“As a man of integrity, I will not sit idly by while outside entities attempt to destroy my character,” he said in a statement. “The members of the Rochester Police Department and the Greater Rochester Community know my reputation and know what I stand for.”

Mayor Lovely Warren informed the Rochester City Council that in addition to Singletary, the entire command staff announced its retirement today. She noted that none of the police brass were asked to resign.

Deputy Chief Joseph Morabito was also among those retiring. He had served on the Rochester Police Department for 34 years.

“It has also been my honor to serve this community through these many years; a community I was born and raised in, and deeply love,” he wrote in a statement.