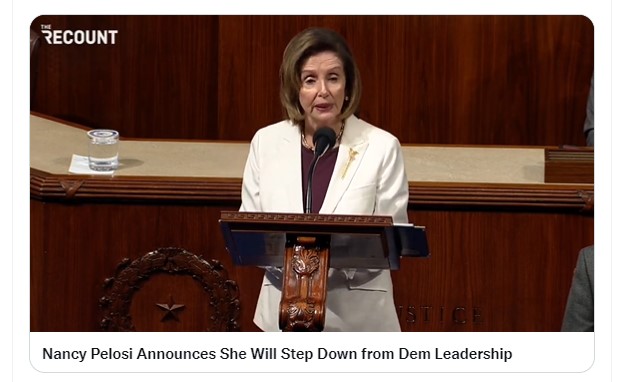 Thursday marks a great day for America, an exclamation of the importance of the GOP winning back control of the US House of Representatives on November 8th.

Speaker Nancy Pelosi just announced her plans for her future in the Democrat caucus moving forward.

Pelosi, 82, has been the Democratic leader for two decades while representing her constituents in California, District 12, including San Francisco and surrounding cities.

She was instrumental in pushing through 2 bogus articles of impeachment against former President Donald J. Trump, both of which failed in the United States Senate.

The current Speaker will not be leaving Congress after winning her 19th term last week. She is expected to remain, at least temporarily, given the GOP’s razor-thin majority.

As Pelosi took the mic, the chamber was packed with Democratic lawmakers, while the Republican side of the aisle was largely empty — a symbol of how politics have changed over Pelosi’s three and a half decades in the House.

House Minority Leader Kevin McCarthy, R-Calif., did not attend the speech in person, but House Minority Whip Steve Scalise, R-La., was present. Senate Majority Leader Chuck Schumer, D-N.Y., crossed the Capitol to watch Pelosi speak, while the front row on the Democratic side of the chamber was filled with fellow female lawmakers from California.

Speaker Nancy Pelosi enters the House chamber to a standing ovation ahead of her announcement on plans for her future. pic.twitter.com/3Gxwn988cF

“With great confidence in our caucus, I will not seek re-election to Democratic leadership in the next Congress,” she said.

Speaker Nancy Pelosi (D) announces she will step down from Democratic leadership next year, calling for a “new generation” to lead House Democrats:

“With great confidence in our caucus, I will not seek re-election to Democratic leadership in the next Congress.” pic.twitter.com/SqaA5QkTyj

“I have enjoyed working with three presidents achieving historic investments in clean energy with President George Bush, transformative health care reform with President Barack Obama, and forging the future from infrastructure to health care to climate action with President Joe Biden,” Pelosi said in her speech Thursday; she did not mention Trump.

All I can say is Hoor Rah, good bye to Nancy Pelosi. you will not be missed at all.