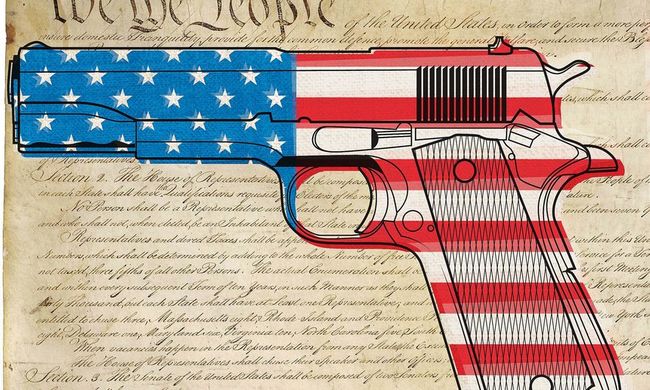 Our nation’s Founding Fathers, while drafting the Constitution and later the Bill Of Rights made sure the citizens of their new republic had an enshrined right to own weapons, as a deterrent against a future out control tyrannical government trying to take away their liberties.

The Second Amendment, which was ratified in 1791, was proposed by James Madison allowing for the creation of civilian forces, aka, militias.

“A well regulated Militia, being necessary to the security of a free State, the right of the people to keep and bear Arms, shall not be infringed.”

On Thursday, The Supreme Court chose to intervene by striking down a long-standing unconstitutional gun law out of the state of New York.

Associate Justice Thomas wrote in the 6-3 majority opinion: “We too agree, and now hold, consistent with Heller and McDonald, that the Second and Fourteenth Amendments protect an individual’s right to carry a handgun for self-defense outside the home.”

The high court originally heard arguments over the case, New York State Rifle & Pistol Association v. Bruen in November, when justices appeared skeptical of the law’s requirement to demonstrate a “proper cause” for obtaining a license to carry a concealed pistol or revolver.

The conservative-leaning court appeared skeptical of the law, which restricted their citizen’s rights, based on the opinion of a bureaucrat.

Conservative Justice Samuel Alito suggested New York City citizens should be allowed to carry firearms on the subway late at night, for instance, and the more moderate Chief Justice Roberts asked a poignant question of New York Solicitor General Barbara Underwood, “How many muggings take place in the forest?”

Roberts also questioned why a person seeking a license to carry a gun in public for self-defense should have to show a special need to do so; “The idea that you would need a license to exercise a right is unusual with regard to the Bill of Rights.”

The original lawsuit was brought by a  pair of plaintiffs who challenged the law, Robert Nash and Brandon Koch. They filed their lawsuit after the Empire State rejected their concealed carry applications for insufficiently demonstrating a special need for a permit despite having already passed required background checks for gun licenses for hunting and target practice.

In this case, Thomas explains that nothing in the Second Amendment distinguishes between home and public “with respect to the right to keep and bear arms.”

“We know of no other constitutional right that an individual may exercise only after demonstrating to government officers some special need,” Thomas wrote for the majority.

The court’s three liberals, in dissent, accused the conservative majority of failing to consider “the potentially deadly consequences of its decision.”

In what is considered remarkable in the rapidly changing world, the U.S. Constitution is still in place, keeping our republic from eroding under the pressure of leftist mobs demanding it is replaced with a pure democracy, “mob rule”, governmental system instead.

We The People must fight to maintain our liberties, starting with prayer, and in our defense of our Constitution.