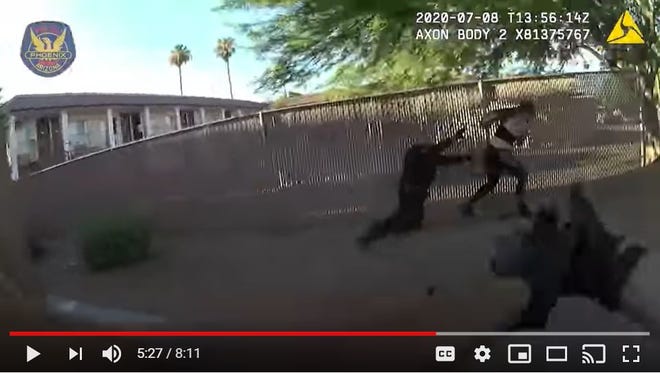 Bodycam footage captures wild moment woman opens fire on police officers. They fire back and take her down — and then into custody.

What was she thinking? After you get finished with this article you might ask your self this very question.

With body cameras now being worn by most metropolitan police officers, more and more videos are getting released to the public anytime a police shooting or recorded use of violence is brought to the city police chief. Bodycam footage captured the moment a nonchalant female suspect whipped out a handgun and began firing at police during a July 8 incident in Arizona.

Police released bodycam footage of the incident on Wednesday, according to The Arizona Republic.

Phoenix police arrived to question 24-year-old Jovana Kelsey McCreary after she reportedly engaged in a dispute with her roommate.

McCreary’s unnamed roommate told authorities that he had kicked her out of their shared apartment because she was acting “crazy” and had a gun in her possession.

Police arrived on the scene to find McCreary near her former apartment and began questioning her as to whether she is armed with a gun.

She denied having a weapon and instead said that her roommate was threatening her.

During questioning, McCreary seemed to keep her cool, spending her time casually answering officers’ questions and using her cellphone. She even consented to officers searching her belongings, where they reportedly recovered unspecified drugs and ammunition.

Around this time, responding officers discovered that McCreary has an outstanding warrant for her arrest, and attempted to begin the process of taking her into custody.

Out of nowhere, however, she pulled a gun hidden in her waistband and fired shots at responding officers, narrowly missing them.

Bodycam footage of the incident shows McCreary tumbling to the ground, from where she can be heard screaming.

First responders arrived on the scene and took her to a hospital for treatment. She is expected to survive, according to reports. Fortunately, neither one of the officers was injured.

According to the Republic, internal and criminal investigations into the incident are underway.

The Maricopa County District Attorney’s Office will review the case upon the investigation’s completion.

So what was she thinking, I don’t want to go to jail for my warrants so I will kill 2 officers and get away to live happily ever after?

I am so glad she is a terrible shot, and the officers are ok.