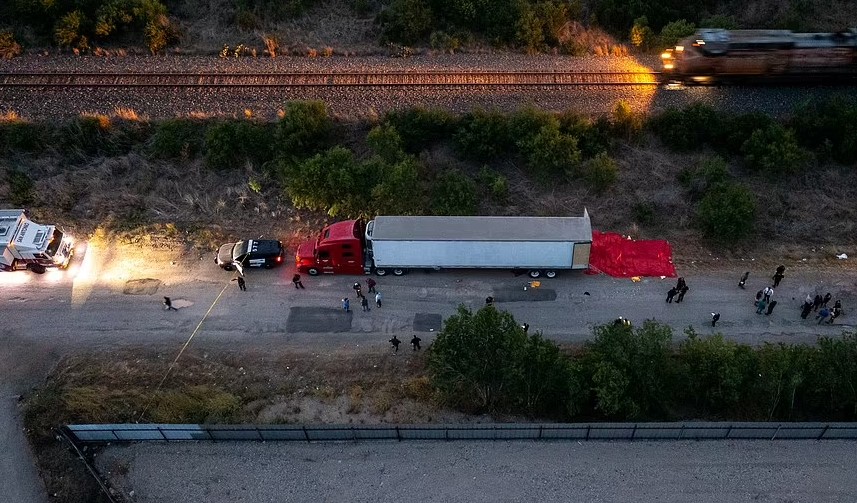 Another terrible story is coming out of the US/Mexico Southern border.

More illegal aliens have reportedly died as a result of human traffickers or coyotes abandoning them in the sweltering heat. On Monday, it hit a high of 103 degrees in Southern Texas, with high humidity.

At least 50 people were found dead inside an abandoned tractor-trailer on Monday in San Antonio, Texas, in what appears to be one of the most deadly recent incidents along the U.S.-Mexico border.

I believe President Joe Biden’s open border policies are to be blamed too.

With the borders wide open, the illegals are also crossing the Rio Grande, with some of them not making it out alive.

Reporting in the middle of the Rio Grande River as hundreds of migrants cross the river illegally into Eagle Pass , Texas , the majority are from Venezuela and followed for 35 miles to their crossing point in Piedras Negras @DailyCaller pic.twitter.com/8q2wyihdDv

The San Antonio Fire Department is reporting that they found stacks of bodies and no signs of water in the truck, which was discovered next to railroad tracks in the city’s southern outskirts.

Sixteen survivors, including four children, were rushed to nearby hospitals for heat stroke and exhaustion.

Chief McManus said a local worker heard a cry for help coming from inside the trailer and came out to investigate, finding the trailer’s doors partially opened upon arrival and discovering dozens of bodies.

‘The patients that we saw were hot to the touch. They were suffering from heat stroke and exhaustion,’ fire chief Charles Hood said in a press briefing.

Texas Governor Greg Abbott hit out at the President following the deaths, blaming the deadly incident on the Biden administration’s open border policies.

The deaths ‘are the result of his deadly open border policies,’ Abbott wrote. ‘They show the deadly consequences of his refusal to enforce the law.’

These deaths are on Biden.

They are a result of his deadly open border policies.

They show the deadly consequences of his refusal to enforce the law. https://t.co/8KG3iAwlEk

Police Chief William McManus said have three individuals in custody, but they had not established whether they were ‘absolutely connected to this or not.’

The nationalities of the victims have not yet been confirmed, but they are all believed to be immigrants attempting to cross illegally into the U.S.A spokesperson for U.S. Immigration and Customs Enforcement (ICE) said that its Homeland Security Investigations division was investigating ‘an alleged human smuggling event’ in coordination with local police.

Locals said the location where the truck was found was a known drop-off point for migrants, according to The New York Times.

‘You can tell they just got here. We see them with backpacks or asking for food or money,’ Ruby Chavez, 53, told The New York Times.

‘They know this area. They jump off the train and get picked up,’ Chavez’s husband said.

The I-35 highway near where the truck was found runs through San Antonio from the Mexican border and is a popular smuggling corridor because of the large volume of truck traffic, according to Jack Staton, a former senior official with ICE’s investigative unit who retired in December. Staton said migrants have regularly been intercepted in the area since the 2017 incident.

‘It was only a matter of time before a tragedy like this was going to happen again,’ he said.

Under the Biden administration, a recode number of illegal aliens were captured in 2021. Unfortunately, the flow is only increasing in 2022:

The U.S. border patrol arrested, 210,000 migrants, at the Mexico border in March alone.

What America does with its failed immigration and education systems and policies will have profound short and long-term effects on the health, safety, the success of illegal aliens and American children for generations to come.

We The People must vote in November 2022 and 2024, then demand and hold accountable the conservatives we elected to secure the border, end amnesty, asylum, and chain migration, then deport away.