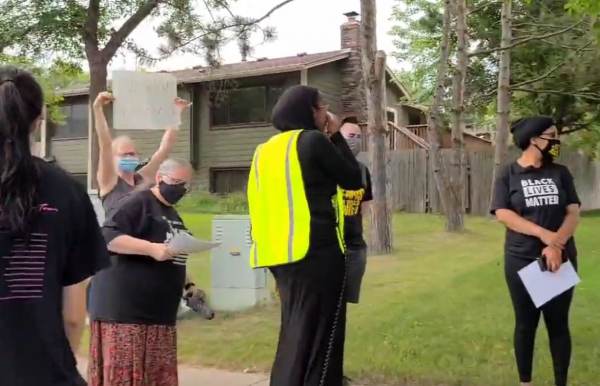 This has to stop now!

What are Americans suppose to do when mobs come to their home, scream at them through their windows, and refuse to leave?

If you pull out your weapons, like the St. Louis couple did when felt threatened, the District Attorney might put together a case, against you, to take you to jail!

Here is another story of the domestic terrorist group, Black Lives Matter (BLM), going home on an unsuspecting couple.

The Black Lives Matter mob protested outside the home of Senator Warren Limmer, the Chair of the Minnesota Senate’s Public Safety Committee, on Saturday morning.

The mob used bullhorns to wake up the Republican state senator and his neighbors.
They then opened his screen door, looked through his windows, and banged on it for over an hour.

On Saturday morning Democratic leader Nancy Pelosi accused federal agents of being (Nazi) stormtroopers for protecting the city of Portland that has been destroyed by BLM and Antifa terrorists.

But here we have actual stormtrooper tactics being used once again by leftist protesters.
Of course, Pelosi and fellow Democrats will say nothing about this violent movement.

The protesters demanded shouted at “Snorin Warren” and demanded real transformative change to Minnesota’s Justice System… by threatening the GOP Senator at his home.

Via Weasel Zippers and Alpha News

A group of protesters has arrived and growing at the home of Seantor Warren Limmer, the Chair of the Senate’s Public Safety Commitee.

I say the DOJ gives a blanket statement that if Domestic Terrorists come on your private property, intimidate you, and refuse to leave, you have a Constitutional right to use your weapon to demand they leave, and if attacked use to take out the mob.

How were these homeowners to know if some of the mob, was going to come around the back and get in, etc? The average person is not trained to deal with terrorists and should have their freedoms stripped from them by progressive politicians and DA’s allowing these mobs to go after people on their private properties.