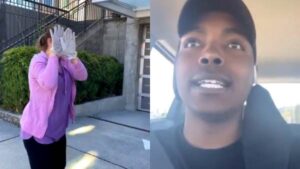 Human history has always included hateful people who look for and eventually find, weaker people to terrorize for various psychopathic reasons. Internally most people, who have a conscience, are enranged by these actions but very few do anything about it.

Domestic terrorist groups like Black Lives Matter and ANTIFA, claimed to have started to fight for “social justice” with the desired end result of equality for all people, and freedom from government rule.  If their actions and results backed up these claims, they would have a lot of support as these are American values.

Unfortunately, both groups were actually set up by Marxists, who through violence are trying to force change. In the process, like all terrorist groups, the founders tend to become wealthy while their foot soldiers do their bidding.

Here is the purpose of BLM, from their very own website.

“Whose mission is to eradicate white supremacy and build local power to intervene in violence inflicted on Black communities by the state and vigilantes. By combating and countering acts of violence, creating space for Black imagination and innovation, and centering Black joy, we are winning immediate improvements in our lives.”

Case Is Point – A BLM anti-white activist,  followed an unsuspecting woman home. then terrorized here, on camera, for his social media mobs pleasure. Doxxing her by filming her address and car license plate, which provides information for other deranged SJWs to act on.

A Seattle-based Black Lives Matter activist with the Twitter handle “wypipo-h8,” slang for “white people hate,” followed a terrified white woman home, harassed her, filmed her address and license plate, and is attempting to ruin her life for some social media clout.

Karlos Dillard describes himself as an “author, entertainer, and public speaker.” He is also a racist woman abuser.

In a video that he tweeted, the activist claimed that he followed a terrified woman home because she had flipped him off. As she shakes and cries in terror, he yells at her for cutting him off and continues to make wilder and wilder claims against her until he eventually tells a passerby that she called him the n-word. Something that he left out at the beginning and in his tweet. Almost like, that did not happen at all.”

This is not the first time this domestic terrorist challenged and recorded people for his followers and probably will not be the last.

With local police under extreme pressure to not violate people of color rights, then we should expect more lawlessness from those whose purpose is to create havoc and hurting those, with white skin, for the SWJ purposes. We The People must get armed, support our police, and demand prosecution of all crimes regardless of the skin color of the person who committed them.