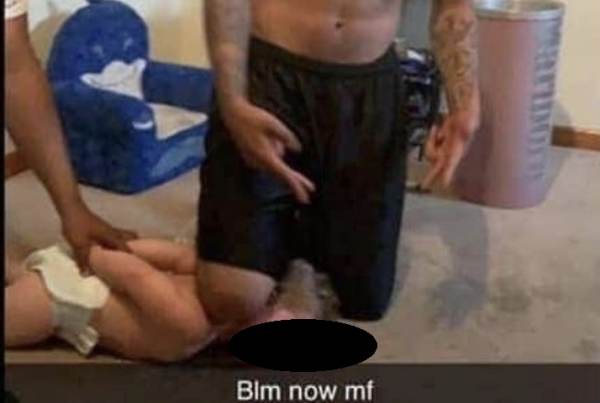 In most nations of the world, women and children are cherished and protected as the most vulnerable in their communities.

In cultures, whose laws were established using Judeo-Christian ethics, it is morally wrong to hurt innocent people and culturally abhorrent when innocent defenseless children are abused. Men have the responsibility of being the defenders of their families and are expected to if needed, lay their life down in their defense.

In America 2020 though, we see the rise of egalitarianism, feminist activism, white sis-gendered male shaming, and social justice warriors rioting. The results are, no one is now considered off-limits from the violence promoted by these groups.  Even the children, which is where we start our story.

A photograph of a black man kneeling on the neck of a white baby while a black woman holds the diapered child’s arms is stirring up a massive amount of rage on social media.

The shocking and disturbing photograph, which was captioned by the abusers as “Blm now mf” is beginning to make the rounds after being uncovered by Vincent James of Red Elephants.

Imagine if this was in the reverse. The fact that there are multiple people doing this to this child shows you that this…

The man in the photo’s name is Isaiah Jackson and he resides in Ohio. A man with that name was arrested on July 20 in Ohio for a probation violation.

The paternal grandmother of the child wrote on Facebook that it was taken while the two-year-old was with his mother, who is dating Jackson, at the time the photo was taken. The mother attempted to defend the photo when confronted about it, calling the person “ignorant” and claiming that “he wasn’t hurting him.”

The very angry grandmother said that the baby is now with her son and safe. She is currently attempting to find out who was holding the child’s legs and who took the photo.

“My son is beyond pissed. He took his boy to the ER to get checked out and everything came back good,” she wrote. “He better be glad nothing bad happened to my grandson and he better hide from all the people who will be coming for him when he gets out of jail.”

WHIO TV 7 reports that “investigators in Clark County said they are investigating the post, however, no arrests have been made and charges have not been filed.” Their report said that according to emergency scanner traffic, deputies, police, and medics were called to two different addresses Tuesday morning in Clark County as a part of the investigation.

A sick, twisted, and evil couple who used the mother’s child, for a BLM photo op, endangering the innocent boy’s life by putting the weight of a grown man on his neck!

I hope they are both arrested, prosecuted, and jailed for decades. The courts need to be fixed.

Just because a woman has a baby, yet is unfit, she should not be allowed to have custody nor be with her child unsupervised, who still has their life in front of them, if not hurt by those who were supposed to love them instead.