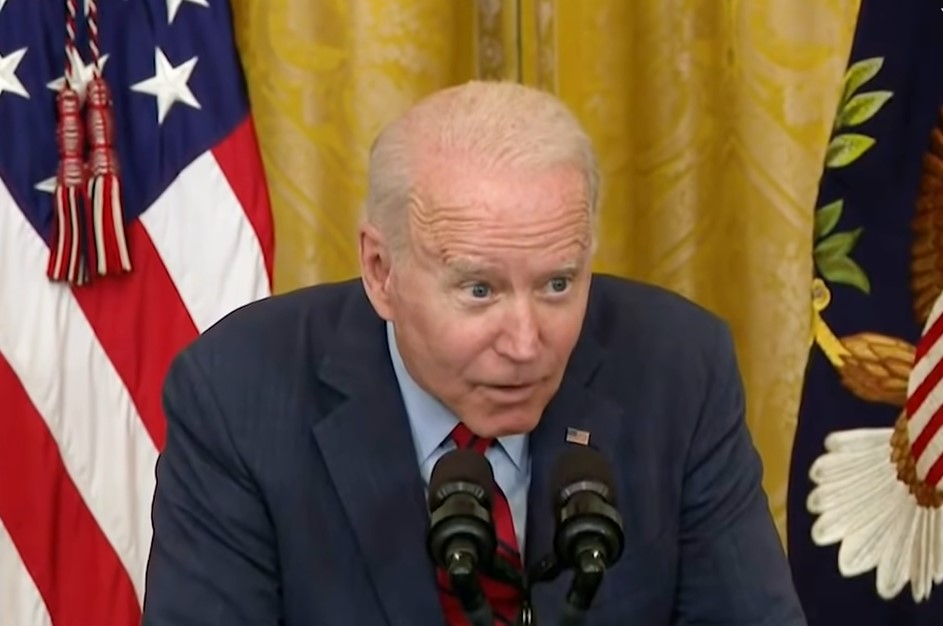 I am convinced one of the toughest jobs in the world, is being employed as a Joe Biden’s handler.

They have to cover for Biden who acts as though he is stuck in the 1970s. He is mentally unable to do the job as the Commander In Chief, wanders around periodically, and frequently makes speaking blunders, which the White House quickly has to “clarify” what he meant to say.

On Friday, President Joe Biden broke into a sudden whisper to U.S. Naval Academy graduates during his commencement speech in Annapolis, Maryland.

The president leaned into the microphone and suddenly whispered that he is their “Commander-in-Chief.”

Biden Whispers to Naval Academy Graduates: ‘I Am Your Commander-in-Chief’

Biden: “You’ve all got so much to be proud of. You really do. By the way, once you’re commissioned, remember, (whispers) I’m your commander-in-chief. So don’t ask me too tough a question, okay?” pic.twitter.com/baXbeoS6Ee

Biden’s speech Friday marked the first time he gave commencement remarks to the Naval Academy as president, CBS News reported. While vice president, he spoke in front of Academy graduates in 2010 and 2015. Over 20,000 people were in attendance at Friday’s ceremony, according to the outlet.

During his remarks, Biden honored the late Republican Arizona Sen. and Naval officer John McCain, calling him an “American hero.”

“But being here, I can’t help but think of John and how the Naval Academy meant so much to him. He chose these grounds for his final resting place. John, as an American hero, withstood torture, and years of being held as a prisoner of war. When he came home, he wanted to continue to serve.”

Then Joe lied by saying he supposedly applied to the Naval Academy in 1965, the year he graduated from the University of Delaware.

“I was told the Class of ’72 is here. I was appointed to the academy in 1965 by a senator who I was running against in 1972 — never planned it that way. I wasn’t old enough to be sworn in. I was only 29 years old when I was running,” Biden told the graduating class of midshipmen. Biden continued his babbling, “He was a fine man. His name is J. Caleb Boggs. I didn’t come to the academy because I wanted to be a football star. And you had a guy named [Roger] Staubach and [Joe] Bellino here. So I went to Bellino and Staubach are the only two Navy football players to win the Heisman Trophy as the best college football players in America. Bellino won the award in 1960, while Staubach did so in 1963″, he added.

RNC Tweeted out a fact check on Joe’s claim (lie):

Joe Biden falsely claimed he “was appointed to the [Naval] Academy in 1965” while speaking to Naval Academy graduates today.

Biden graduated from the University of Delaware in 1965, making that impossible. pic.twitter.com/oSTmjeqSLb

The reality is after Biden graduated law school in 1968, he reportedly was deemed unfit for military service by citing childhood asthma. His memoir doesn’t mention the condition while describing his football exploits or his work as a lifeguard. A report released in November by his doctor also doesn’t mention asthma.

The president has a history of whispering into the microphone when addressing large crowds.

In 2021, he whispered to the press about COVID relief and environmental legislation. He also broke into a stage whisper in November during the United Nations Climate Change Conference in Glasgow, Scotland, where he leaned into the microphone and told the audience the U.S. economy was growing.

“I got them $1.9 trillion relief so far,” Biden whispered, as he leaned into his microphone to answer a question from a reporter.

Joe has been branded Creepy over his continual whispering.

During Q & A Session On June 25th, 2021 – Joe Biden was labeled ‘creepy’ again as he whispers repeatedly during Q&A

In Seattle on April 22, 2022, Biden Does His Creepy Whisper, Then Suddenly Starts Screaming

My advice to all of America?

Since there is no hope for Biden, stay focused on who you can help get elected locally, statewide, and nationally.

Sadly we still have to endure another 2 1/2 years with him in office until we send the 79-year-old Manchurian candidate packing.