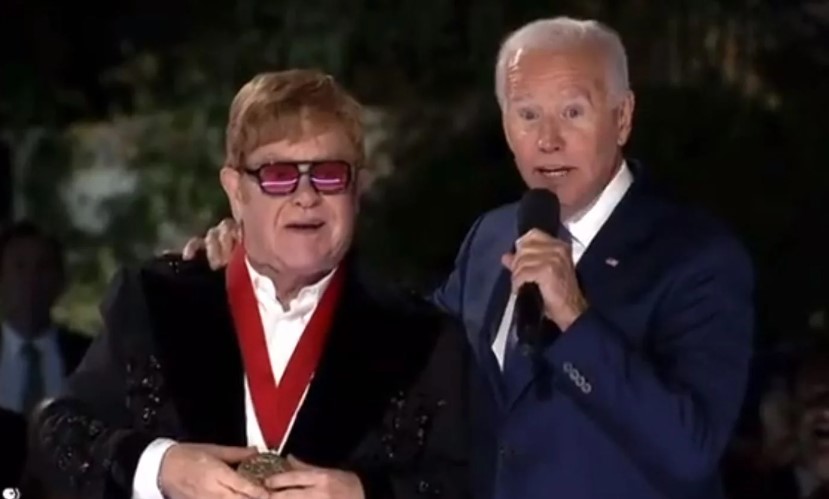 President Joe Biden on Friday presented Elton John with the National Humanities Medal, surprising the music icon following a performance on the South Lawn of the White House.

The declining senior citizen said that he and first lady Jill Biden had invited John to the White House to thank him and praised the singer for his music and advocacy in the global fight against HIV/AIDS.

Elton John has been openly gay since 1988. He entered into a civil partnership with Canadian filmmaker David Furnish in 2005; they married after same-sex marriage became legal in England and Wales in 2014.

Gay and bisexual men of all races and ethnicities remain the group most severely and disproportionately affected by the epidemic.

Men who have sex with men represent approximately 1 percent of the U.S. population but accounted for 69 percent of all new HIV infections in 2019.

During the ceremony, Biden once again showed that he is beyond unaware of his surroundings by wrapping his arm around Elton, and telling the crowd, “By the way, it’s all his fault we are spending $6 billion in taxpayer dollars on HIV and AIDS this month.”

According to HIV.gov the US spent $7 billion on AIDS funding in 2020.

Biden with his arm around Elton John:

"It's all his fault we are spending $6 billion in tax payer dollars on HIV and AIDS this month" pic.twitter.com/Hql7RfxEsL