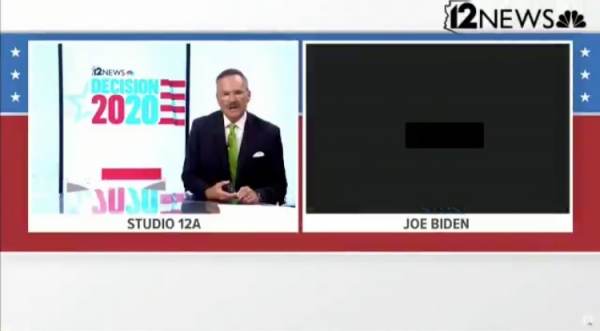 It is so disturbing to see the Biden team still trying to get the former Vice President elected, even they know he is mentally declining. Mr. Biden has turned away from a camera while speaking, did an interview with a mask dangling from his ear, insulted people at his campaign events, and forgot what office he was running for, etc.

His handlers have kept him away from live audiences, blaming CV-19, limited his communications to a few people a day, and now that they are getting close to the election, are ready to cut his live interviews, when needed, to keep Joe from embarrassing himself.

The interview started off awkwardly and did not produce anything substantive for the audience to learn about how a President Biden would govern.

The 77-year-old opened up the conversation saying Arizona is an important city.

Biden’s staffer interrupted the news anchor live on air when he asked about China.

The staffer ended the interview and cut the screen blank so Biden wouldn’t embarrass himself.

“That’s our time, thank you so much,” the staffer said as he cut the call.

No shame on the left. It will be a travesty and mockery of our elective system is a man with dementia is elected President, unable to do the job day one. Just today, Biden’s campaign chair was on Fox and Friends telling the host they want fact-checkers for presidential debates because Joe Biden is incapable of forming coherent arguments. Come on America, turn out and stop this charade in its footsteps.