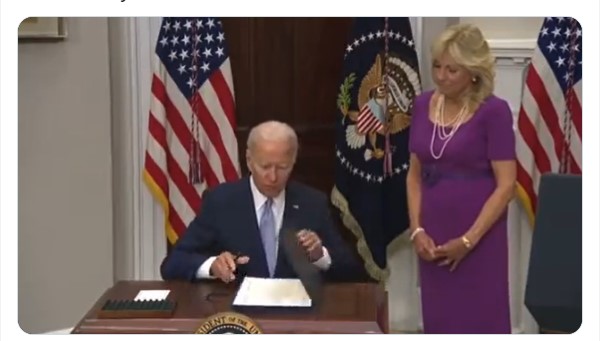 The package is loaded with (unconstitutional) red flag laws, waiting periods for those under 21, and takes away the right to a firearm for those convicted of certain misdemeanors.

Joe Biden has signed the most sweeping gun violence bill and says "lives will be saved". pic.twitter.com/NjcukgFxbD

Fox News reported that Biden signed the legislation and said, “This bill doesn’t do everything I want. It does include actions I’ve long called for that are going to save lives. I know there’s much more work to do. And I’m never going to give up.”

“On Thursday night following the Senate vote, President Biden urged the House to ‘promptly vote on the legislation ‘and send it to my desk’,” the report added.

The law comes in the wake of a major Supreme Court decision on Thursday that struck a blow against “may issue” states that were imposing “proper cause” standards for concealed carry permits.

Then Biden abruptly told the reporters waiting to ask the nation’s Chief Executive Officer a few questions about the Supreme Court’s Friday decision, etc, that he had to go catch a ‘helicopter’, allowing him to once again escape his responsibilities in Washington DC, heading back his home in Delaware.

“I have a helicopter waiting for me…I think the Supreme Court has made some terrible decisions,” Biden said before walking away.

Pandora’s Box was just opened some more, allowing the anti-gun mob to take a few more bites out of the power and force of the second amendment, with Republicans joining in.

It is telling of how corrupt our federal government is.

Just one day after the Supreme Court shot down an unconstitutional gun law, Joe Biden just signs another one.

Well, hopefully, the Bipartisan Safer Communities Act also sees that same fate sometime soon, as the Red Flag laws contained in the new legislation is unconstitutional, at its very core.