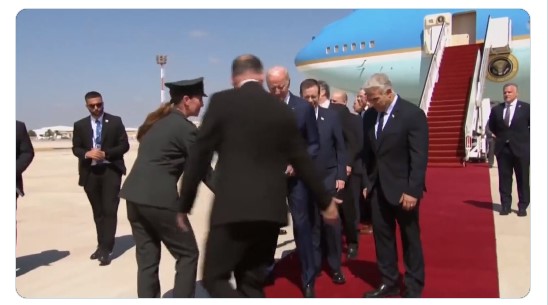 There is a proverbial saying, and American folklore, ” If you can’t stand the heat, get out of the kitchen”. In straight talk, if you can’t handle the pressure, then leave the environment causing it.

The problem for Americans is their Chief Executive Officer appears to be unable to handle the difficult job that he assumed on January 20th, 2021.

President Biden frequently takes off for long weekends to his beach home in Deleware or heads overseas to meet with foreign leaders, allowing him to escape the mess he made at home and avoid the American press corps.

With inflation worsening, the Biden team Wednesday took off overseas for a Middle East tour, this time starting in Israel.

It did not take long for Joe to once again show the world that he is feeble, and in need of help to do even basic tasks.

Even though Biden’s handlers had 10+ hours of flight time to prepare him, Joe had to ask for directions, made a gaffe while discussing the Holocaust, and tried to shake hands without someone present.

The president was greeted by Yair Lapid, Israel’s interim prime minister, at Ben Gurion Airport alongside a handful of other delegates.

At one point, Biden asked the group, “What am I doing now?” Conservative pundit Benny Johnson observed, “Biden is so lost,” in reaction to his apparent state of confusion.

Biden is so lost.

Biden’s request for guidance comes just weeks after he inadvertently showed the world that his staff provides him with directions for tasks such as walking into a room and sitting down at the table.

In late June, Biden flashed a notecard during a meeting with union and private sector leaders that displayed the widely mocked cheat sheet:

Joe Biden isn't senile, guys. His handlers just have to give him step by step directions for every single thing that he does.

Contributing to his latest follies, Biden then stumbled during his opening remarks in Israel while reading the words Yad Vashem — Israel’s official memorial to victims of the Holocaust. Shortly after, he misspoke about the “honor of the Holocaust” before quickly correcting himself to say “the horror of the Holocaust.”

Biden lands in Israel and immediately says he is there to “keep alive the honor of the Holocaust.”

Then butchers the name of the Jerusalem Holocaust museum Yad Vashem.

Following a different press event, Joe extended his hand to shake hands with, no one knows.

This is not the first time the 79-year-old, rapidly declining lifetime politician has tried to shake hands with Casper the ghost.

Joe Biden was left empty-handed as he appeared to shake hands with thin air after a speech on the United State’s ongoing supply chain woes.

Biden had just finished delivering a nearly 40-minute speech in Greensboro, North Carolina, when he turned to his right and stuck out his hand, despite being alone on the stage.

Biden’s latest flub only adds to his self-admitted reputation that he is prone to social faux pas. In 2018, Biden told the press, “I am a gaffe machine, but my God, what a wonderful thing compared to a guy who can’t tell the truth,” while comparing himself to former President Donald Trump.

On Wednesday, Biden emphasized the United States’ commitment to its alliance with Israel.

“We’re going to deepen our connections in science and innovation and work to address global challenges through the new strategic high-level dialogue on technology,” the president said in his speech at the airport. “We’ll continue to advance Israel’s integration into the region, expand emerging forums and engagement.”

To me, this stop in Israel was just a formality so the fact that Joe committed several blunders has to be frustrating for his team.

The real reason for the trip is so Joe Biden can grovel at the feet of Saudi Arabia’s Crown Prince Mohammed bin Salman, asking him to increase the kingdom’s oil output significantly.

See Joe can’t increase production at home due to the green new deal mob, so he has to try to get other world leaders to send him some instead.