Biden In Trouble? Bernie Sanders Delegates Mount Convention Rebellion Over ‘Medicare For All’

In a symbolic move, hundreds of the more leftist delegates in the Democratic party have signed a pledge to not support the democratic national platform at the upcoming national convention.

This late move is a concern for those who want to show unity this time, as they are expected to officially choose former VP Joe Biden to be their nominee to run against President Trump.

The main issue is coming from the democratic socialists in the party, who are demanding a European style Medicare for All system, which is currently rejected by Mr. Biden, to be included in the party platform.

The unions, on the other hand, who are behind the Biden campaign, have negotiated sweet medical packages for their members, which would all go away if everyone gets to put on a government-run program for all Americans. They will fight to keep the platform in line with Joe’s campaign promises. 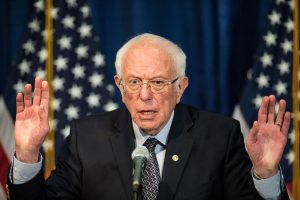 A revolt is brewing among Bernie Sanders delegates three weeks from the Democratic National Convention.

More than 360 delegates, most of whom back Sanders, have signed on to a pledge to vote against the Democratic Party’s platform if it does not include support for “Medicare for All,” the petition’s organizers told POLITICO. They argue that single-payer health care is an urgent priority amid a worldwide pandemic and the biggest unemployment crisis since the Great Depression.

The left-wing groups Progressive Democrats of America and RootsAction.org are announcing Monday that they support the vow to vote against the platform if it doesn’t include Medicare for All. The Bernie Delegates Network, a coalition made up of hundreds of Sanders delegates, said it will also publicize the petition. Organizers expect those efforts will net hundreds of more signatures, including from Biden delegates.

It is also likely to trigger fears among Democratic leaders about a repeat of the 2016 convention when the party’s divides were on public display as Sanders supporters booed the mention of Hillary Clinton.

Despite their frustration with Biden, progressive leaders behind the pledge all said they are voting for Biden and working to elect him. RootsAction.org, for instance, noted that it is planning to spend hundreds of thousands of dollars on an effort to persuade swing-state progressives who are on the fence to get behind Biden.

It looks like the schism in the Socialist/Democrat party is alive and well but in the end, they will come together because unlike GOP, they unite when it matters.