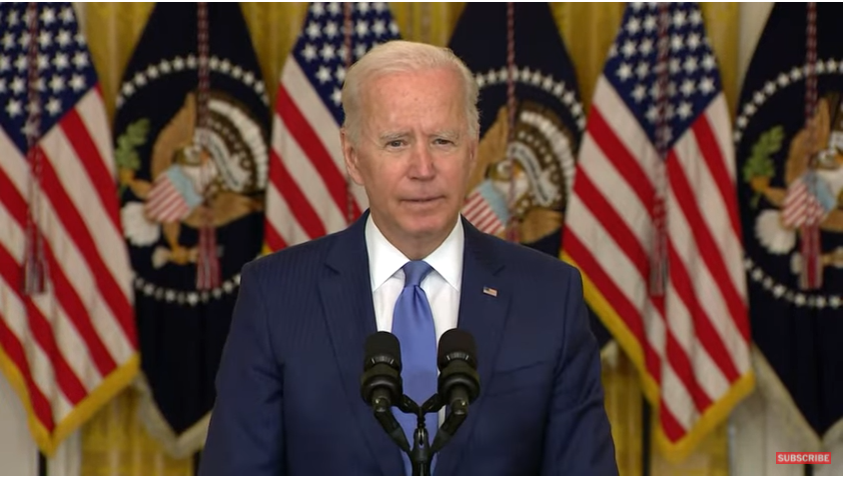 During it, the unpopular president attempted to show empathy by admitting life is tough for most Americans because of increasing food, gas, health care & rent costs.

He said this massive amount of spending would be a way to close the wealth gap, arguing that the economy currently doesn’t work for many Americans and that the Democrats’ bill can fix it.

“Are we going to continue with an economy where the overwhelming share of the benefits go to big corporations and the very wealthy or are we going to take the moment right now to send this country on a new path?” Biden said in remarks from the White House. “One that invests in this nation, creates real sustained economic growth and benefits everyone.”

Joe Biden unconvincingly said the bill as it would keep inflation down and reverse climate change, stopping extreme weather.

“My Republican friends talk a lot about inflation but if you want to talk about actually lowering the cost of living for people in this country, my plan does just that,” said Biden. “Here’s something else my plan does: It confronts the crisis of extreme weather events that we’re seeing all around us and around the world…”

The Democrats have a history of spending including President Franklin D. Roosevelt’s “The New Deal” and Lindon B Johnson’s “War On Poverty” initiatives.

The problem with massive spending is the fallout when the spending stops.

This 3.5 trillion dollar spending would be like eating a lot of carbohydrates.  A build-up to a feel-good rush, but with no substance behind it.

What would be the results; Massive debt, increased government dependence, and much higher taxes on those making over 200k a year?

I say OK to the $1.2 real infrastructure bill, after removing all pork but complete death to the $2.5 socialist wish list.

OPEN BORDERS CHAOS! 6,000 And Growing Unvaccinated Illegals Under TX Bridge Waiting to Be Released Inside US
Virginia Teacher: Teaching Students to Follow Directions Is White Supremacy