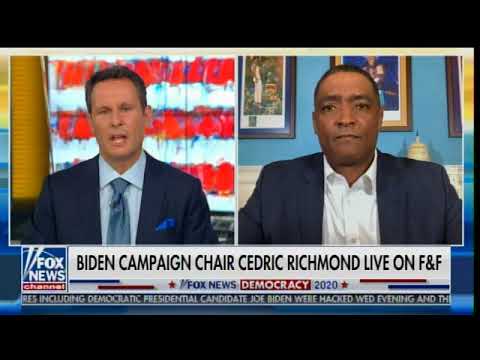 Former VP Joe Biden is kinda running for President. A disaster in front of people or a camera, Joe is kept in seclusion most of the time. I had not heard much about who his handlers are until today when I saw one of them interviewed by Fox’s Brian Kilmeade.

Joe Biden’s Campaign Chair Cedric Richmond joined FOX and Friends this morning to discuss the current state of the campaign. All I witnessed was a preprogrammed talking head for Mr. Biden, spouting out talk points with zero support for his assertions.

During his discussion with Brian Kilmeade Richmond compared Trump voters to David Duke voters in the United States.

When he was asked about this comparison he said, “Well, I’m using it as an example as secret voters and people who voted  for someone who may not have great character.”

Cedric Richmond then suggested there are likely more secret Joe Biden voters than Donald Trump voters because it’s so hard to stand up to this president(?)  Well, Mitt Romney certainly doesn’t think so!

And finally, Richmond said he wants “fact-checkers” to post notes live on the TV screen during the debates.  That way the left can dominate with their bias on live TV.

Via FOX and Friends.

Wow, oh wow. Let the debates begin, will probably be the most entertaining TV of the year.

I don’t see how Joe Biden will be able to stay focused and aware during them, and even with his handlers, like Cedric Richmond, calling for fact-checking during the debates, no tricks or distractions will be able to hide Sleepy Joe this time.