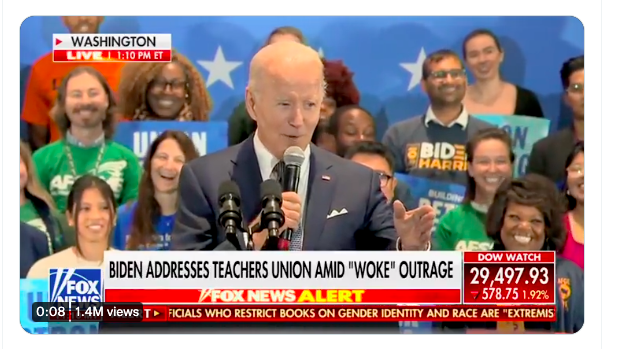 The Biden family has a long history of documented and alleged criminal activity, including sexual abuse of young girls, yet neither one has been charged criminally for their actions.

Hunter’s laptop is full of videos and photos of some of his exploits, while Joe, who almost 80 years old, has made numerous direct questions and has toughed underaged girls during public events.

Troves of social media users were disturbed and confused following President Joe Biden’s latest cryptic remark about a friendship, this time one he had with a 12-year-old girl when he was 30.

During a speech to the National Education Association, the nation’s largest teachers’ union, and other Democrats on Friday, Biden momentarily interrupted his remarks on climate change to address a woman in the crowd he apparently knew long ago.

Biden said, “And everybody found out, there’s not a lot of total climate deniers anymore after they’ve seen what happened this year. But guess what, we got a lot to do.”

He then pointed into the crowd, and in his creepy low voice said, “You gotta say hi to me.”

The crowd laughed and Biden said, “We go back a long way. She was 12 and I was 30, but anyway. This woman helped me get an awful lot done. Anyway.”

The crowd laughed again, though not everyone who heard Biden’s off-the-cuff remark found it so endearing.

“As dementia progresses, patients lose more of their filter and tend to blurt out the truth. Biden: ‘She was 12, I was 30.’” wrote conservative podcast host Monica Crowley.

("You know the right-wingers are going to tweet 'did he sniff her hair then?'") https://t.co/wEdUby5W0J