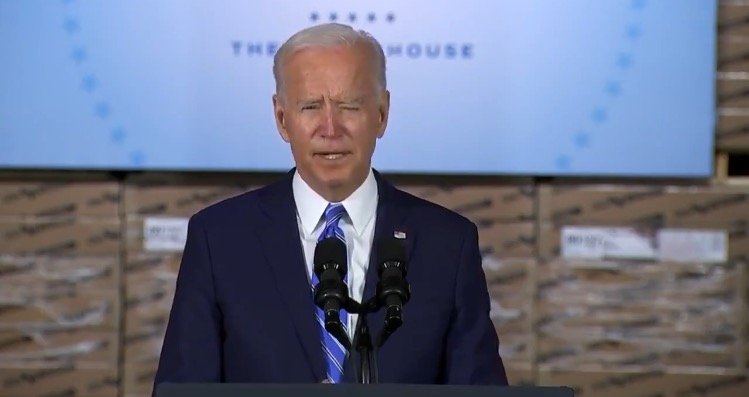 After 10 months the Biden administration realizes that even though the world knows Joe is a mentally declining radical, the fact that the left is not willing to force him out of office has them pushing him in in front of cameras more and more the past few weeks.

With his poll numbers tanking the Biden team traveled to a liberal safe space, Chicago, IL, to promote his unconstitutional vaccine mandates.

The tyrannical U.S. President delivered remarks from a Clayco Construction site in Elk Grove Village after taking a tour of the facility.

As usual, when Joe goes off his teleprompter he struggles. During his speech, Biden went off the script struggling to recall the word “telephone.”

He first called it a television a few times waiting for this brain to work.

Joe Biden: “Last night I was on the television, on television, i was on…the….telephone” pic.twitter.com/SsHOvHBenF

Let’s listen in to Biden

We’re going to continue monitoring this.

Biden who has shown a propensity of not caring about people, such as canceling the Keystone XL project, costing 45K jobs, and more recently leaving Americans behind enemy lines in Afghanistan, callously defended the “mass firings” and thousands of people losing their jobs because of his vax mandates.

“When you see headlines and reports of mass firings and hundreds of people losing their jobs, look at the bigger story,” Biden said bragging about his jobs-killing mandate.

Pres. Biden on COVID-19 vaccine mandates: "These requirements work…More people are getting vaccinated, more lives are being saved." https://t.co/mXpuEhLyiE pic.twitter.com/K5tqD9wedd

The hardest part of watching Biden is the reality that we were warned of how radical he would govern if elected and yet he managed to win anyway.

The movie is actually a lot worse than the previews we saw in November 2020.